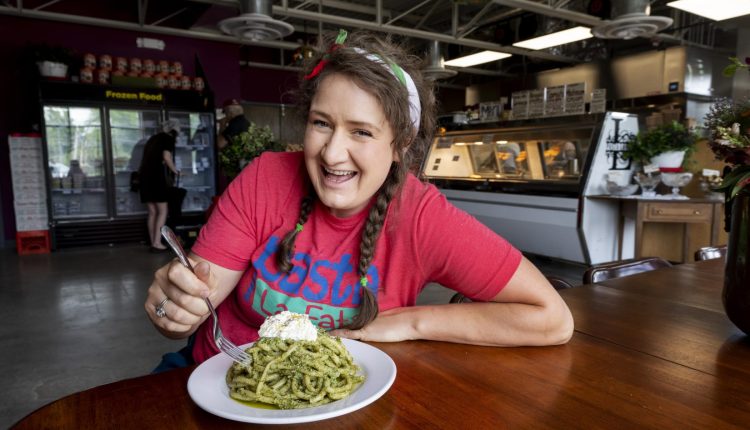 It’s been nearly six years since Shelly La Fata held a pop-up event at Cafe Berlin, selling giant, hand-made toasted ravioli and marking the official start of Pasta La Fata. And after several phases, from pop-up to community kitchen, the business is making a new home in a permanent location.

Pasta La Fata opened its brick-and-mortar location at 1207 Rogers St., suite 106, in early June. It’s the culmination of years of growth and experimentation for La Fata, who has gained a loyal following of customers through her consistent sales at the Columbia Farmers Market where she often sold out within two hours.

When the pandemic hit, La Fata, like so many others, had to pivot. Instead of the previous plan of going to various music festivals across the country, it was time to start a website, and change focus to pre-orders and delivery. “We just dug in our heels,” she says. It was also during that time that she created the Pasta La Fata Scrappy Meal program, which turns her scraps into free meals for anyone who needs one and continues today.

By the time things started to come back after pandemic shutdowns, La Fata realized one very important and motivating fact: “I’m personally really sick and tired of doing pop-ups.” There’s a lot of work that goes into each event, outside of simply preparing the food, which is a labor of its own when making everything from scratch, the way La Fata does. “This is all motivation to find out what it takes to have walls and a roof,” she recalls.

While she still felt it was early to be able to invest in a space, an opportunity began to present itself. Local developer John Ott, a fan of La Fata’s food, reached out about a space coming available on Rogers Street. La Fata, who generally describes herself as a “yes person,” had to decline. “I told him it was too nice for us,” she recalls. “It’s too soon and I couldn’t afford it.”

So she continued to work out of the kitchen at Cafe Berlin, an arrangement that worked well while the restaurant was closed due to the pandemic. But as things began to reopen, Cafe Berlin needed the space again and La Fata needed to find a new place from which to run Pasta La Fata.

That’s when the business moved into the COMO Cooks Shared Kitchen on The Loop. The shared kitchen space is meant to allow small-batch food producers a place and equipment to use at an affordable per hour rate. While La Fata says the space was perfect and really helped the business grow even more, Pasta La Fata was already a little too big for the shared kitchen.

“It really was an incubator for us,” La Fata says. “But they could only house us for a couple of months.”

At that point, the space from Ott was still available, and La Fata had gotten a lot of support from local business owners, like her former boss and owner of the Ozark Mountain Biscuit Co. Bryan Maness, and her business coach at the Missouri Women’s Business Center, Sarah Cyr. So she decided to go for it. La Fata put together a business plan and secured financing, finally taking the space Ott had offered months before.

For La Fata, the new space allows her to continue experimenting with food without boxing her into any one format. The shop is not a traditional restaurant, something she says wouldn’t be a fun endeavor for her right now. “I don’t want a restaurant,” she says. “Maybe in 10 years, a restaurant will be fun. I just want to have fun.”

In the new Pasta La Fata, customers will find a case of ready-to-eat, fresh specials for the day and another case of Italian pastries and sweets, while the rest of the shop is devoted to take-home meals and sauces. The food continues to be scratch-made and feature local, in-season ingredients, something that’s always been a priority for La Fata. “We design our menu around what’s growing,” she says.

The shop also stocks Italian ingredients, especially anything that may be somewhat hard to find elsewhere, and a few cooking tools, such as cheesecloths and graters. “It’s a curated selection of everything you need for an Italian meal,” La Fata says.