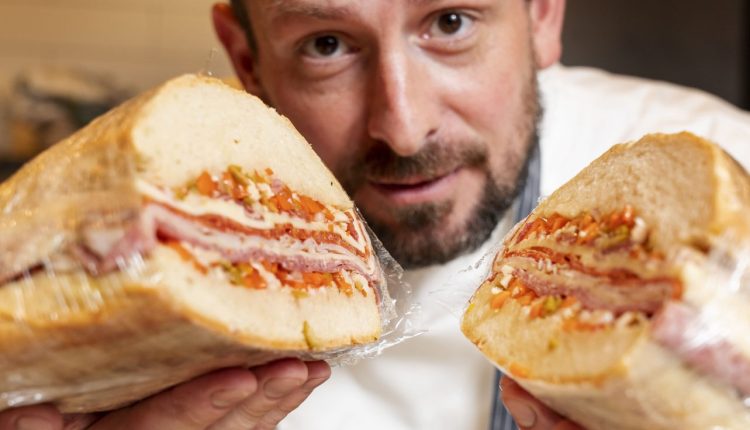 If you take a trip to New Orleans, the muffuletta from Central Grocery is a must have. And, after you’ve had one, it apparently becomes a craving that you just have sometimes.

I have some friends who were having a baby and, as they went into labor, the muffuletta craving hit. I had been wondering what to bring over after they got home with the new baby, and this was it.

The original sandwich from Central Grocery in New Orleans can feed at least three or four people, so I decided to go big as well. I made a huge focaccia in a cast-iron pan and stuffed it with three types of cheeses, four types of meat and about a quart of olive salad.

They were able to eat on it for about a week.

The name, muffuletta, is said to come from the Sicilian muffuletta sesame topped bread. The bread is a mushroom cap-shaped loaf with a similar airy texture to focaccia (a yeasted flatbread; think of a thicker pizza crust that can be used as sandwich bread). You can use just about any type of loaf to make the sandwich at home; in a pinch, you could make a small personal-sized one on sliced bread or a roll. If you want to add the traditional sesame seeds, but can’t find a bread you like with it, add them yourself. Make an egg wash (a little beaten egg with a small amount of milk or water), brush it onto the bread, then sprinkle some sesame seeds on top. Bake at 350 degrees for about two minutes until the egg wash sets.

You may be able to purchase olive salad at your grocery store, but it really is not hard to make. Traditionally, there are olives, carrots, onions, peppers, garlic, cauliflower and “other vegetables.” It’s called “other vegetables” because they won’t reveal their secret as to exactly what it is. The olives will already be pickled, and it is pretty easy to pickle the rest of the vegetables.

Once the vegetables are cut into bite-sized pieces, they can go into a container that should be covered with hot pickle brine. The brine is two parts red wine vinegar, one part water and one part sugar, with some salt and aromatics. Once the hot mixture is poured over the “other vegetables,” the container can go into the refrigerator. If your liquid does not completely cover the vegetables, you may want to use another container to weigh the vegetables down until they cool.

To finish the olive salad, add chopped olives and olive oil, and season. You can make large batches of this and let it sit for weeks in the refrigerator for future sandwiches, salads, charcuterie trays and more.

THE MEATS AND CHEESES

Genoa salami, mortadella and ham are traditional, but depending on what you have available, you may have to improvise. Bologna could be a substitute for mortadella, but you can switch it up to a different sliced meat, or even add more types of meat. Hot salami, hard salami, capicola, pepperoni, soppressata, prosciutto, bresaola, culatello, speck, lardo, pancetta or guanciale would all be great additions depending on your preference. Provolone and some type of Swiss or Swiss-style cheese with a bite (Emmental, Jarlsberg, gruyère, deli Swiss or baby Swiss) would all work.

If you purchase the sandwich at Central Grocery, the wrap will be deli paper and they will send you on your way. You can sit on a bench in Jackson Square a few blocks away, but you will more than likely need a table, plate, knife and fork to tackle this beast. I have seen people use the plastic wrap method to help the sandwich “meld” together. Wrapping the finished sandwich several times, in several directions can help it compress and hold together. Once it is wrapped, refrigerate for an hour or two before diving in. If you flip the sandwich about halfway through, it will help disperse the dressing.

Hiking the Trails: Get the Gear for a Tremendous Trek