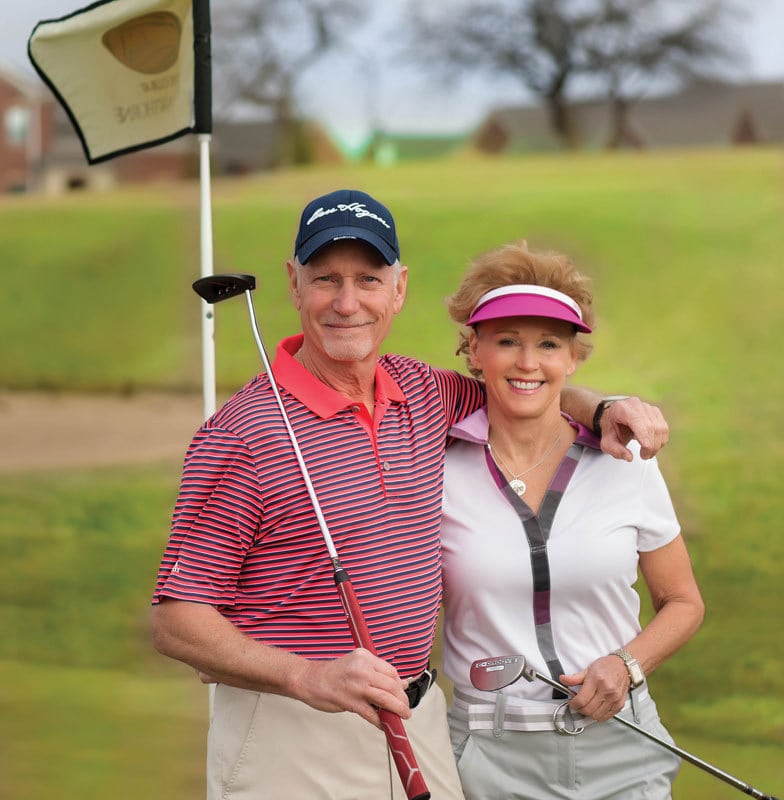 Chuck and JoAnn Wilson are sitting together at 10:30 a.m. in the living room of their villa at Old Hawthorne. Their dogs, Dotty and Coali, are lying down nearby. Outside, a brisk winter wind is blowing across part of the golf course that is their backyard. Somewhere in Columbia, people are complaining about the gray and gloomy day. Somewhere a retired couple is turning on a TV or groggily reminiscing about the good old days. Not here. Not Chuck or JoAnn. It is a fresh morning in a bright, new world that they are making for themselves.

After a 36-year career as a top Shelter Insurance agent, Chuck joined JoAnn in retirement on New Year’s Day.  JoAnn had already retired several years ago as a group fitness instructor at Wilson’s (no relation). New is a good word to describe their upcoming journey through retirement. There is nothing old about either of them. They look fit and young. They have the sure gait and sturdy shoulders and posture of people who are active and haven’t slouched away their lives in front of computer or TV screens. Both are energetic: Chuck, with an intense and restless energy, and JoAnn with a calmer, more even manner. And neither has plans to slow down now that it’s their time to do with as they please.

“Retirement isn’t something that brings you to a screeching halt; it should be part of a process that moves you forward,” Chuck says. JoAnn shares the same level of enthusiasm for the future as Chuck. “We hope to be even busier, even more active,” she says.

To say that Chuck and JoAnn lead an active life is a championship-level understatement. Active? Sure. Frantic? Never. Their decisions on how to spend their days are based on a shared vision of a well-lived life. JoAnn believes in having a balanced life that is centered on her family. “I think there are two things that keep you young,” JoAnn says, “One is staying connected to your family – your kids and grandkids – and the other is having friends that you go out and have fun with.”

The life that Chuck and JoAnn are leading didn’t just fall into their laps. They made it happen, and they create new possibilities each day. After 30 years of living in south Columbia in a home on three acres, JoAnn felt she was spending too much time doing yard work and not enough time with friends. She figured it was time for a change. “We knew a couple people who lived out here in Old Hawthorne and loved it. We moved here and it has been great – the best thing we’ve ever done because of the social aspect,” JoAnn says.

But just moving from one home to another doesn’t necessarily change anything except the scenery you see out your window. Chuck and JoAnn made sure their circle of friends would grow larger. They took up golf and card playing. “We don’t play serious golf,” JoAnn says. “We use it as a social tool. We started a group on Sunday night, just couples, and we don’t even keep score. You don’t play with the same person each week. We call it the Fried Chicken Derby.” Before long, they joined the social committee of the Club at Old Hawthorne and started card groups.

Nancy Galloway, a friend of the Wilsons since they moved to Old Hawthorne four years ago, describes the couple as young at heart. “We have a lot in common,” Galloway says. “We all enjoy good wine, good food, cooking and being impulsive – whether it’s a last-minute dinner party or playing golf.”
Although they make room for spontaneity, Chuck and JoAnn’s daily schedule reflects their goals for living a healthy, rewarding retirement. Chuck’s 36 years as an insurance agent have impressed him with the importance of planning for a secure future. The reality of getting older and losing friends has taught him the importance of living for the day. “I didn’t think of retiring until my financial planner said ‘yes, you can do it now,’” Chuck says. “Then all of a sudden in the last year, nine of my friends have died and I realized I don’t need to work anymore.”

Once Chuck makes a decision, that’s it. “When he does something, he goes at it whole hog,” John Blakemore says, a longtime friend. “I admire that about him. It was that way with golf and competitive shooting.”

The friendship between the Blakemores and Wilsons has lasted more than 30 years, starting when their daughters were in school theater programs together. When asked to describe JoAnn in a word or two, Patti Blakemore had trouble limiting herself: “Positive, a good listener, enthusiastic, loyal and supportive,” she says.

JoAnn’s cheerful disposition is apparent to anyone meeting her, but there’s a grit and strength to her that’s not as obvious.

Seven years ago, when her sister was diagnosed with Stage IV colon cancer, Chuck insisted that JoAnn go in for a colonoscopy. His insistence saved her life. JoAnn was diagnosed with Stage III colon cancer. She underwent surgery, followed by rounds of chemotherapy. Regardless of how ill or fatigued she felt, she continued leading group exercise at Wilson’s Fitness Center.  Now, cancer free, she volunteers at the Old Hawthorne Club, still leading group exercise three days a week. Her sister, who is made of the same grit, is still battling cancer.

JoAnn and Chuck have been married for 47 years. They met when JoAnn was just 14 and Chuck 18. “I was playing in a rock ’n roll band, and the piano player took me over to JoAnn’s house to meet her older sister,” Chuck says. Before long JoAnn and he were dating, and when JoAnn turned 20 and graduated college, they were married.

“My parents told me I couldn’t get married until I finished college,” JoAnn says. Determined to marry Chuck, she went through college as quickly as she could. “I took 21 hours each semester and graduated in three years,” she explains.

For their first seven years together, they worked on Chuck’s father’s cattle ranch in Callaway County. During that time, Chuck had his first exposure to law enforcement. Rustlers were picking away at area ranchers’ herds and the sheriff needed more deputies. Chuck was deputized, beginning a 40-year commitment as a reserve law enforcement volunteer, first in Callaway County, then with the Columbia Police Department and Boone County Sheriff’s Department.

“That was back in the day when they actually rode in patrol cars,” JoAnn says. Chuck would patrol the streets of Columbia from 11 p.m. to 7 a.m., then start the day at the insurance agency.

Eventually, he shifted from volunteer patrol work to serving as a firearms instructor, then a defensive tactics instructor, teaching officers how to stay safe while in dangerous situations. Along the way he introduced Columbia to the Crimestoppers program, which continues strong to this day.

Chuck also found time to earn a black belt in Tae Kwon Do and to train German shepherds in defensive protection. For years, he competed with his dogs nationally. Chuck enjoys all sorts of competition, whether it’s reaching a sales goal or getting first place in a shooting contest. Settling for an average performance isn’t in his nature.

His drive and discipline served him well at Shelter Insurance. “We were the only agency in the history of the company to win every major award they have,” he explains. Along with the awards, he qualified for travel incentives based on his sales performance, which meant more than a dozen trips to Europe for the Wilsons.

Business success? Check. A well-planned retirement? Check. Days full of interesting activities and evenings spent with friends? Check. Chuck and JoAnn’s planning, hard work and commitment to friends and family have paid off. Like everyone else who has weathered the years together, they know they can’t control the future, but they can sure build an interesting present.