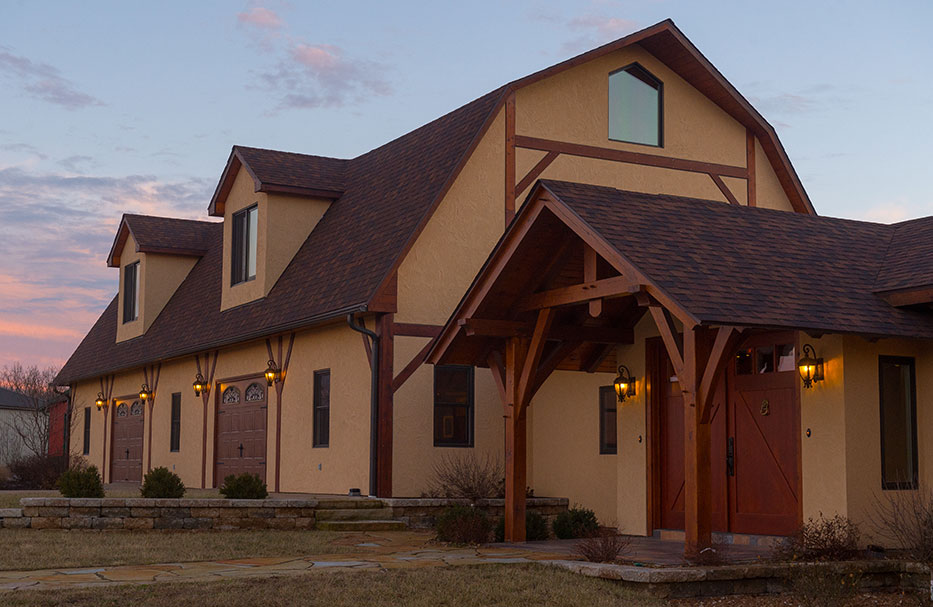 Fate was at work when Ron Onwezen was pulled over for driving just a hair too fast on Hwy 163 while out enjoying a morning cruise.

It was there, with an idle moment to spare, that he noticed the parcel of land for sale on the south side of the highway. It only took one more drive by, this time with his wife, Kathy — and without snagging another ticket — to decide that it had to be theirs.

“We went and visited it later that same afternoon and just fell in love with it,” Kathy says. “The location was perfect. It’s the feel of being out in a country setting, but still close to all the amenities that Columbia offers.”

Soon after, the couple embarked on a three-month design journey and two-year build to unite the best of the many places they had traveled into one splendid space they could call home.

“We were inspired by different castles we visited while in Europe,” Kathy says. The high ceilings and openness of the rooms struck a chord with the couple, steering them toward a design that would “create a home with an Old-World Medieval feel while still providing an atmosphere of warmth.”

That old-world feel is stamped into the very bones of the timber-framed home. Unlike many modern homes that are built with 2×4 or 2×6 studs, trusses and nails, this residence is framed with white oak beams fastened together using mortise and tenons, an ancient method where every beam is custom-fit using joinery and pegs. There are no nails within the entire structure.

It was built by Midwest Custom Timber Frames, based out of Centralia.

The Onwezen’s built this way with intention. “We wanted a house with a solid and sturdy structure that was built to last,” Kathy says.

And indeed it will, according to the home builder and owner of Midwest Timber Frames, Steve Lee, who says that this home “is designed and built for sustainability,” adding that it will last “well beyond the time it takes to grow new oak trees.”

From its frame to its finest details, it is a home that beckons to be called unique.

Driving by, the residence could be mistaken for a luxurious stabling barn with an attached riding arena, or maybe a wedding venue well-suited to the rustic-chic bride. Two buildings, connected by a breezeway, make up the residence.

The large open barn-like structure, which houses a loft complete with its own kitchen, bathroom and living area where the Onwenzen’s lived until the rest of the house was completed, was built first. The culinary oasis of a kitchen and great room are also under its 25-foot pitched ceiling.

Arguably the most interesting space in the house, aptly named “The Octagon,” was added on later. “The octagonal design is definitely out of the ordinary,” Kathy says. “We wanted a room from which we could view the beauty of the outdoors and wildlife through all of the seasons.”

Each wall is studded with large windows that look out in all directions across the 31-acre property. Two sets of glass French doors lead out to a natural stone patio. Inside or out, there’s no better place to take in the sunset over the stocked 4-acre lake. But, the best view in the octagon room is found by looking up — 31 feet up, to be exact.

The dome of the octagon houses 16 windows and at least the same number of beams. “It was important to us to have a lot of natural light coming in year round,” Kathy says of the many windows in the home. “The dome is an architectural beauty. It was fun watching them bring in the high beams. We would watch them bring in the crane and carry these big beams across the yard and just fit it all into place. It was amazing.”

Inside, two seating areas within the octagon, one surrounding a stone wood-burning fireplace, provide ample space for gathering. The Onwezen’s gave even the tiniest details their full attention. Handcrafted elements like the wrought-iron foot rail and the tall, dark cabinets on he Irish-inspired wet bar in the octagon are a nod to the pubs the couple patronized during their travels.

Noting another inspirational feature of the castles, Kathy recalls that “they all had this beautiful handmade tile,” Kathy says. This same sort of tile, imported from Italy, covers the ground and the backsplash in her own kitchen, and continues out to floor the entire barn area. Fusing together the modern and old-world touches, the floors throughout warm the home using radiant heat.

They worked as a team throughout the entire process.

Ron designed the exterior and architectural elements of the home, and Kathy took on the interior decorating. Though Kathy had no prior experience designing living spaces, she found plenty of inspiration in the pages of home decorating magazines. She plucked her favorite designs and placed them thoughtfully throughout the roughly 7,000-square-foot space, creating a stately, yet comfortable patchwork that offers a sense of intimacy in the open home.

It’s not just a mixture of eras, but also a medley of the couple’s own histories that’s woven into the design.

Ron, who hails from the Netherlands, and Kathy, who calls Kansas City her hometown, moved to Columbia in 2001. Ron’s engineering career keeps them well-traveled on international business, often landing them in Europe and Southeast Asia. Though the couple has differing backgrounds, building a home together was something that came together without much differing opinion.

“There was no friction or anything because we have such similarities in our taste,” Kathy says. And of building the home together she says, “We had a blast.”

The Story of You