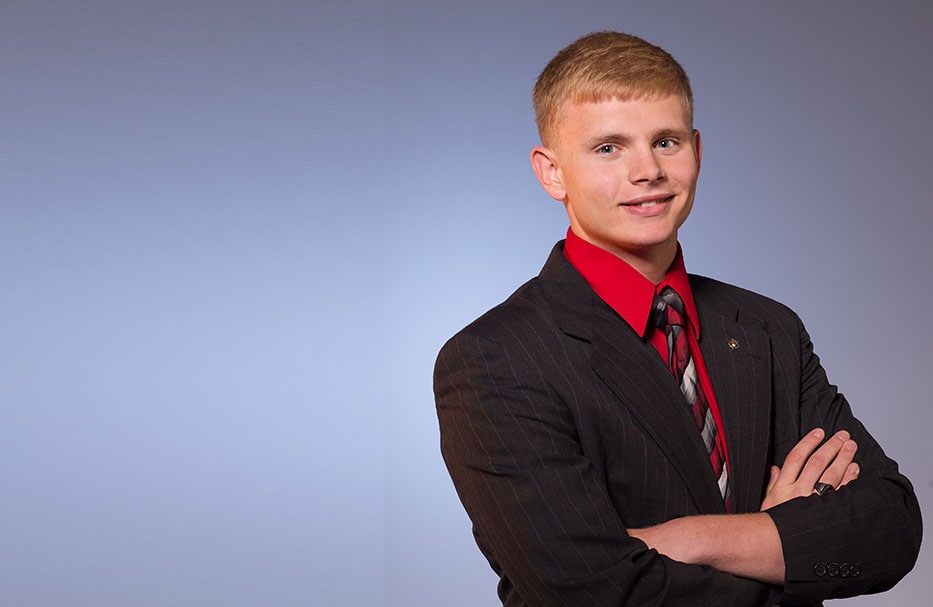 Arthur Betts, a senior at Harrisburg R-VIII High School, struggled with some of the 11- to 13-year-old boys he supervised at a military camp in Michigan last summer. “Those individuals did nothing but cause problems: some of them just wouldn’t follow orders, others would get into extremely heated arguments with other recruits that almost escalated to the physical level, and others didn’t even have the motivation to get up in the morning,” wrote Arthur in his essay.

Arthur learned the youngsters had serious issues going on in their lives and gave them an opportunity to share their stories. “These kids, surprisingly, became the best recruits in my unit… I would like to think that by talking to them about their issues, I helped them in their journey to become cadets and ultimately better men. For me this experience gave me a great opportunity to help mold a small part of our world’s youth to become great people.”

Arthur has a long list of activities and accolades: Eagle Scout, Harrisburg National Honor Society, Alpha Tau Chapter of the Phi Theta Kappa National Honor Society, academic all-state track team, academic all-state offensive and defensive lineman, black belt in Taekwondo and SCUBA certification. And that doesn’t even include his military achievements as a member of the U.S. Naval Sea Cadet Corps, where he ranks as petty officer 1st class. He completed recruit training in 2014 and the petty officer leadership academy in 2015.

Arthur will enroll at MU in the fall to pursue a degree in biology and participate in the Navy ROTC program. After graduation, he will be commissioned into the Navy as an ensign and eventually, he hopes, a Navy SEAL.

But his ambitions don’t stop there: “After or during my military service, I want to go back to school to get my master’s degree in forensic science… After that, I would like to try to become a forensic scientist with the FBI or a protective agent for the CIA.” When he retires, Arthur would like to open a gun shop where he can buy, sell and work on firearms. He seems to be following his own advice to the boys he supervised: “how to become a true member of a team, how to push their limits in everything they do, and how to look at a dream and create a plan to make it a reality.”

Arthur is the son of Aaron Betts of Harrisburg.