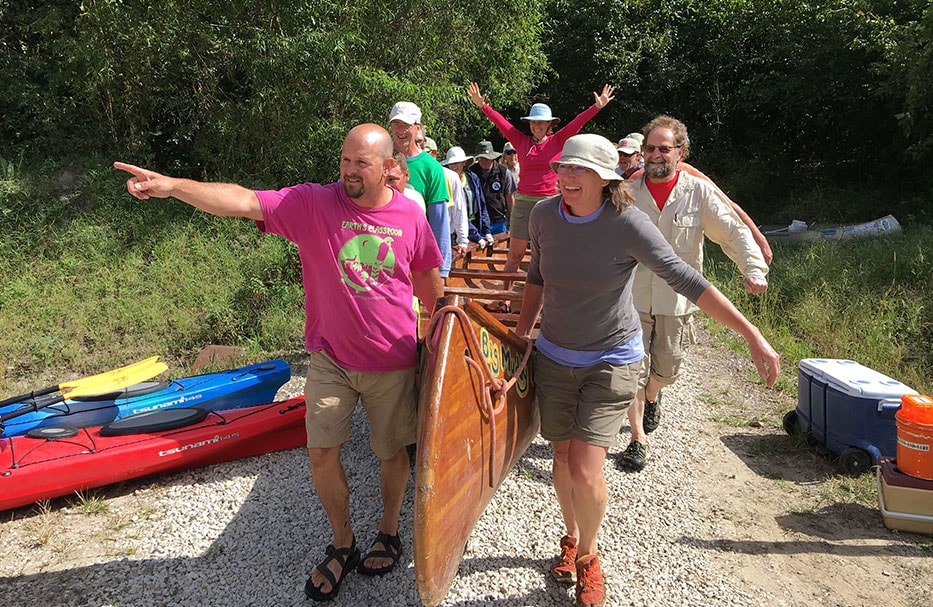 The floating season doesn’t end with the Labor Day weekend. Fall can be the most beautiful time of year to be out on Missouri’s rivers and streams. A case in point is PaddleMO, a 100-mile journey on the Missouri River held in late September, when the weather is still warm but not scorchingly hot and the trees are just starting to turn color.

Last year was the inaugural run for PaddleMO and it was such a success that it is now an annual event. This year’s PaddleMO will be held Sept. 23 to 27, and now is the time to sign up.
The epic journey begins in Hermann and ends near St. Louis at the confluence of the Missouri and Mississippi rivers — a 100-mile float. In between is packed with lots of paddling, educational sessions, great food, camaraderie, music and much more.

PaddleMO is sponsored by Stream Teams United in conjunction with many partner organizations. It offers a chance to step outside your comfort zone and try a new river challenge within the supportive framework of an organized journey. The logistics are taken care of — you just need to paddle.

A Columbia resident, Rob Hunt, helped launch the concept. Hunt, the natural resource education coordinator for the Missouri Department of Natural Resources (DNR) in Jefferson City, teamed up with Holly Neill, executive director of Stream Teams United in Springfield, to plan last year’s trial trip. The two participated in Paddle Georgia, one of the most successful organized recreation paddle events in the country. They came back inspired. The result was PaddleMO.

Not your usual river trip

Two things that set PaddleMo apart are the educational components and the food. For the education aspect, Neill and Hunt turned to Earth’s Classroom, an environmental learning center based in Rosebud. Bill and Jody Miles, co-directors of Earth’s Classroom, lined up educators and researchers from DNR, Missouri Department of Conservation and National Audubon Society to give presentations along the way. Topics included water quality, ornithology, Native American history, mushroom hunting, freshwater mussels and more.

And the food. Ah, the food. Neill and Hunt focused on locally sourced foods. Paddlers dined at restaurants, wineries, breweries and coffee shops as well as at catered meals at the campsites. No peanut butter sandwiches, freeze-dried entrees or instant oatmeal for this group.

“This was the first canoe camping trip we’ve been on where meals consisted of being driven to a local winery, brewery or restaurant, or being served catered meals made with local organic foods,” said Jody Miles. “Wow!”

Hunt was one of about 10 Columbia-area paddlers to participate in the event, many as support staff. His wife, Abbey Hunt, a physical therapist at Peak Sport and Spine, joined him.
Diane Oerly, who is retired from the University of Missouri, served as gear wrangler, driving the support van from one camping spot to the next. Oerly grew up near the banks of the Missouri River in Boonville, and her lifelong love of Missouri’s waterways shows in her active involvement in three Stream Teams and other volunteer work for water-related issues.

Elke Boyd was also on the support team for PaddleMO. An experienced paddler, Boyd was already familiar with the Missouri River near Columbia, but the trip offered her the opportunity to learn about a different section of the river.

“A lasting effect of the PaddleMO trip is that I feel more connected to the river and the surrounding towns on the downstream section, and therefore the river as a whole,” Boyd said. “The trip was my first time visiting this region of Missouri and it left me eager to see more of it.”

Another Columbia resident, Jeff Barrow, is the executive director of Missouri River Relief, one of PaddleMO’s sponsoring organizations. A member of the support team, Barrow knows the Missouri well — he is a two-time veteran of the Missouri River 340 river race.

All ages and skill levels

Last year’s trial trip was limited to 50 paddlers. This year, registration will be capped at 100. Paddlers ranged in age from 11 to 74. For some, it was the first time they had ever paddled a kayak or canoe, or been on the Missouri River. For others, it was a return to a familiar destination.

The youngest participants were middle school and high school students who were part of an Earth’s Classroom program, which included journaling. One student wrote, “When I look upon the Missouri River, I now see reflections — reflections of past memories, present moments and future adventures.”

The students weren’t the only ones with journals. Each participant was given a PaddleMO journal, complete with daily maps and landmarks and space to write their own comments. For Boyd, the journal was a surprise bonus. “The small format, spiral binding and water-resistant paper made it an easy trip reference and allowed marking up the maps during the trip with additional landmarks,” Boyd said.

The five-day, 100-mile trip begins in Hermann and ends at the Columbia Bottoms Conservation Area, and includes camping one night at the Hermann riverfront, two nights at Klondike Park near Augusta, and two nights at Sioux Passage Campground on Pelican Island.

On the first day, the crew paddled 22 miles from Hermann to New Haven, with a detour up Boeuf Creek to Coulter’s Landing, named for John Coulter, a member of the Lewis and Clark Corps of Discovery.

The second day began with a 10-mile paddle from New Haven to Washington, then 12 miles from Washington to Klondike Park near Augusta. The third day was the longest at 28.5 miles. To break it up, nature talks at Weldon Spring, Howell Island and Johnson Island offered a chance to get out of the boats and stretch. The fourth day was shorter, at 17 miles, and again focused on the natural world along the river corridor. Barge traffic made for some exciting moments. Music around the campfire provided a lovely ending to each day.

The final day was just 10.5 miles, reaching the take-out around noon. The Columbia Bottoms Conservation Area provides a stunning view of a great natural feature: the confluence of the Missouri and Mississippi rivers, which forms the third largest watershed in the world. After a picnic lunch, paddlers headed their separate ways, already thinking of next year — convinced that fall is indeed the prime time for a paddle.

For more information, visit www.paddlemo.org. The five-day paddle, including meals and gear transport, is $550. Weekend or day packages are available. All proceeds support Missouri’s waterways.