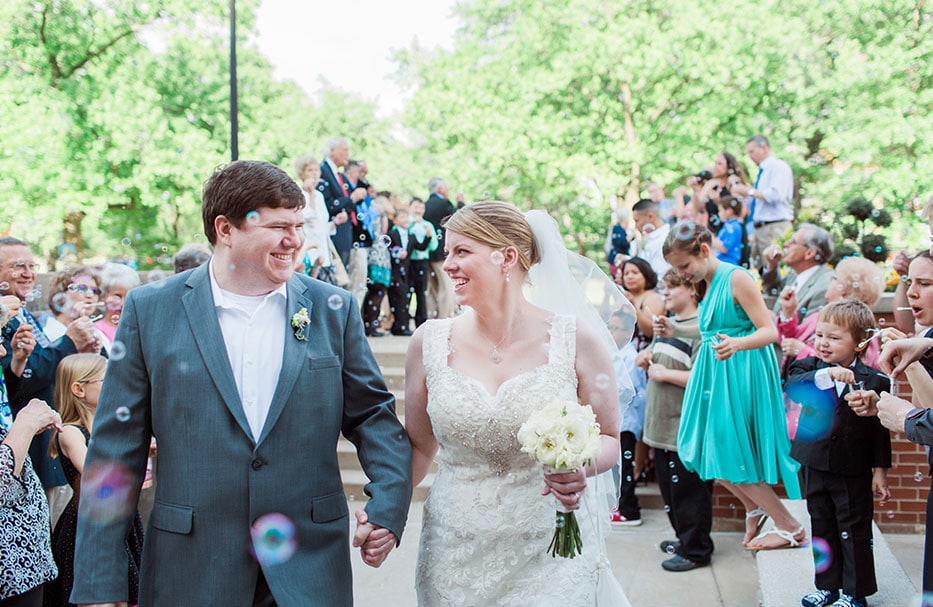 Gretchen Volkert and Travis Coller were wed May 7, 2016, at Firestone Baars Chapel on the Stephens College campus. They met through a mutual friend in the 1990s and were reunited via Facebook a decade later. “There may have been some cyber-stalking involved,” Gretchen said.

When the relationship grew serious in 2014, Travis suggested they shop for rings. A week later, they drove to the river to view the Camelopardalids meteor shower. “It was an overcast night,” Gretchen said. “It was so dark that we couldn’t see each other, and it was so cloudy, we didn’t see any of the meteor shower, either.”

Travis nervously switched the ring from pocket to pocket in the dark; on the way back to their car, he proposed. “I had to feel his face to kiss him when I said yes,” she said.

They chose the luna moth for the theme of their wedding because Travis compared Gretchen to the moth’s delicate beauty early in their relationship. Light green, pale blue and turquoise became their palette.

Gretchen wore a full-length ivory fit and flare Morilee gown with a chapel length train. It had a sweetheart neckline with straps covered straps covered with lace appliqués. The dress had beading across the bust, with patterned embroidery all over and a lace underlay. She wore a fingertip-length double layer scalloped veil embellished with beads and crystals. Her hair was pulled back into a simple bun. She wore pearl drop earrings and diamond studs, as well as a crystal embellished pendant necklace and bracelet. She carried a bouquet of white ranunculus, stephanotis and freesia.

The younger bridesmaids — all nieces of the bride and groom — wore tea-length infinity wrap dresses in pale blue, tiffany blue and mint green. The adult bridesmaids wore full-length infinity wrap dresses in dark teal. A male attendant wore charcoal gray Haggar pants and a white dress shirt with a ranunculus and freesia boutonniere. The nieces each carried a single white rose down the aisle, which they placed in a blue Fostoria pitcher on the altar before picking up their bouquets. All of the bridesmaid bouquets were white ranunculus and freesia.

The altar was covered with a tablecloth crocheted by the bride’s adopted grandmother. As they entered the chapel, parents of the bride and groom placed white roses into the pitcher on the altar, which were joined later by the young bridesmaids’ roses. It also contained two white roses to symbolize Travis’s mother and brother who had died when Travis was young. Travis and Gretchen placed single red roses in vases on either side of the pitcher to signify their unity; the white roses symbolized the love that surrounds them. Travis’s uncle, Stan Coller of Arizona, officiated during the simple, heartfelt exchange of vows.

The reception took place in the Kimball Ballroom inside Lela Raney Wood Hall. More than 300 origami luna moths, made by the bride, decorated the ballroom. Ivory-colored linens with organza table runners in turquoise, blue and green covered the tables. The centerpieces were succulents planted in natural bark-sided containers, with candles in mixed glassware set around them.

The couple honored the bride’s grandparents, who had been wed exactly 77 years earlier, by displaying her grandmother’s wedding dress and photographs. A memory board featured loved ones who were gone. “This helped us remember and include them as part of our day,” Gretchen said.

The simple, two-tier lemon cake was topped by luna moths and one of them (gasp!) was playing on an Xbox One controller.

The couple honeymooned in a friend’s cabin at Lake of the Ozarks for a week, returning to their residence in Columbia where Gretchen is a homemaker and Travis works in the Breaktime Department of MFA Oil.