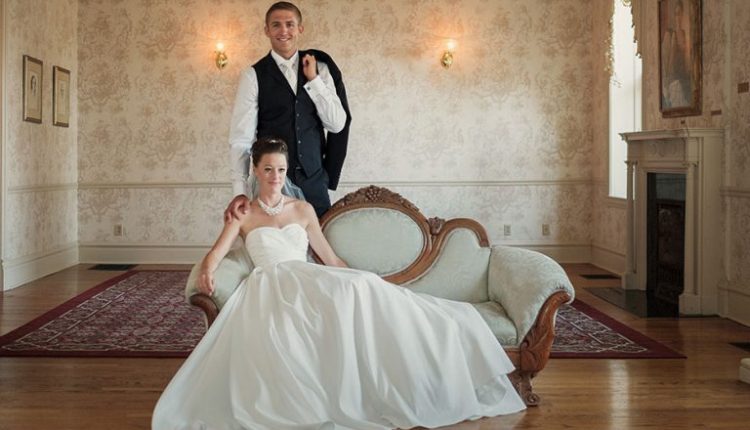 Morgan Pitchford and Neil Fogel were married June 26, 2016, at Firestone Baars Chapel on the Stephens College Campus. The couple met in 2014 at Ouachita Baptist University in Arkadelphia, Arkansas, where they both played sports. A mutual friend introduced them in the weight room.

In July 2015, the couple embarked on a hike at Lake Tahoe, near Neil’s mother’s house. In that wilderness solitude, Neil got down on one knee and proposed.

“It was so special how intimate it was,” Morgan said. “Just us, no pictures, but I like it that way. I have such a strong picture of that moment in my mind that I will never forget.”

That moment in the outdoors influenced their choice of sunset colors for the wedding. The bride wore a strapless ballgown-style floor length dress with a short train. It had a sweetheart neckline and was fitted at the waist. She wore an elbow-length veil and drop pearl earrings that her parents gave her on her 16th birthday, with a matching necklace. She carried a bouquet of hydrangeas, light pink roses, lamb’s ears and eucalyptus greenery assembled by the bride. The bridesmaids wore cocktail length dresses of their own choosing that complemented the sunset color theme.

The groom wore a suit custom made by a friend. The groomsmen wore gray slacks, white shirts, black suspenders and black bowties.

The ceremony was conducted by Chris Barnes, brother-in-law of the bride. He asked the couple to take a moment of silence for their individual selves since from that moment on they would be united as a team and could no longer put their needs first.

“It got a laugh out of everyone,” said Morgan, “but it was a really special moment.”

The religious service featured guitar music played by the groom’s cousin. Both the bride and groom had a large number of attendants, so only brothers and sisters stood at the altar; the remainder were seated in the front row. After vows were made and rings exchanged, the couple served communion to those who wanted to participate.

“It was a special moment we got to share with all of our closest family and friends,” said Morgan.

The reception was held in Kimball Ballroom, next to the chapel. Hydrangea bouquets decorated tables covered with pink and sandstone-colored linens. The couple created their own sign-in book with photos from their engagement shoot, and displayed their baby photos on the ballroom piano. In addition to a three-tier dark chocolate layer cake, Morgan and Neil made lemon bars, Neil’s favorite dessert, to serve at the reception.

“We really just wanted to create an atmosphere of celebration and community, trying to blend both of our families and friends together.”

Neil and Morgan left the reception early to drive to Richmond, Missouri, to see Morgan’s grandparents, whose health prevented them from attending the wedding, and taking pictures with them.

“They are the only grandparents either of us have left, and they have meant so much to me,” Morgan said. “We wanted to include them in our wedding. I am so glad we did that, because a few months later, my grandpa passed away. I will always look back on those pictures and remember him.”

The couple honeymooned in San Jose del Cabo, Mexico, for 11 days, before returning to their home in Tucson, Arizona, where Neil attends law school at the University of Arizona and Morgan is a physical therapist.

The bride is the daughter of Paul and June Pitchford, of Columbia. The groom is the son of Joseph Fogel and Caroline Elliot (stepmother) of Monterey, California, and Sue Fogel of Lake Tahoe and Hawaii.