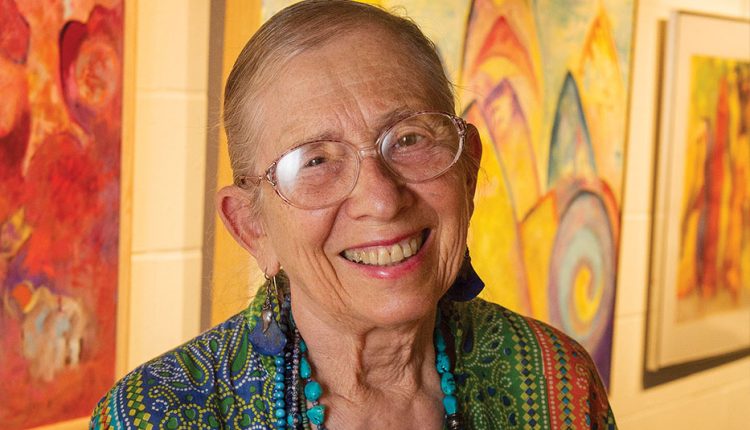 Exploring the world of stories written and those still being born

By nature, Gladys Swan is an explorer and a creator. In both painting and writing, Swan patiently waits for her work to evolve and explain itself. “What comes to me and through me, I play with,” says Swan. “What happens after that or how people respond to it, I can’t judge.”

Along with a straightforward need to write, Swan credits years of teaching literature and creative writing (including at the University of Missouri-Columbia) with continuing her education on the craft. “Teaching a book allows you to know it better than reading it,” says Swan.

“Jungle,” released in April of 2017, is a collection of 10 short stories published in The Sewanee Review between 1981 and 2015. The cover is graced with Swan’s artwork. It is a perfect medley of colorful chaos and controlled beauty, much like the artist.

The first story in the collection, also titled “Jungle,” won the 2015 Andrew Lytle Prize in fiction, given to the best work in the esteemed literary magazine each year. The Sewanee Review itself is known for quality and its firm footing in the field, having published quarterly continuously since 1892. The prize is nestled among other honors including residencies and fellowships, as close as Vermont and as far away as Yugoslavia, Switzerland and Spain.

Since her first two stories were accepted for publication in 1972, Swan has continued to write and publish prolifically. “Jungle” displays the variety within her work, containing two stories that later became full length novels. “’Jungle’ is in another form the first chapter of a novel which is not yet published,” says Swan. “Carnival for the Gods” is part of a larger whole, not only the first book Swan published (a novel released in 1986), but also part of a quintet slated for publication.

“I never thought I’d return to that world,” says Swan. “Ten years later, I found that I wanted to write about one of the characters. So, I wrote that novel.” The characters from the eclectic carnival continued to call to her. Swan obliged as they “insisted on telling their story.”

The majority of Swan’s works are short stories. “The short story is such a wonderful form,” Swan says. “It’s closer to poetry, because you want to get the most out of your material in a short space.”

Swan embraces the challenge of those limitations, utilizing them to highlight her process of exploration and discovery. “It is an interesting challenge to develop a character and to catch that character in a specific and crucial moment, and then find out what that moment is going to bring,” says Swan. “I find that very exciting, because I don’t know how a story is going to end, I have to learn that in the process of writing.”

Swan’s own exploratory nature creates opportunities to see these moments, as she travels often, soaking up as much as the world can offer. She almost seems to be a human tuning fork, keyed into moments which create questions worth the exploration.

Her 1992 novel, “Ghost Dance: A Play of Voices,” was inspired by a conversation with a friend as they visited a town in crisis. “The mines had closed and there was a lot of poverty,” says Swan, “and this fellow said, ‘This is a town that no longer needs or deserves to exist.’ That was a shocking statement to me.” She credits that statement with inspiring her to explore the thought further. “Towns do fade out of the picture,” says Swan, “I wanted to explore that sense of appearance and disappearance.”

While her time traveling and living in New Mexico and Maine (where she spends two months of each year) inspire the settings for her work, Swan has lived in Columbia for 30 years, and the town has offered artistic support and an invested community. Swan paints with a group of women on Tuesdays, meets regularly with fellow authors Marlene Lee and Bill Claassen, and attends Tai Chi classes at The Armory. “One of my major senses of support for what I do comes from my tai chi class,” says Swan. “I appreciate the interest they have in my work.”

As with her tai chi practice, Swan allows her art to move through her. “I feel as though my stories chose me,” says Swan. “There is a connection in some way. I can’t always tell you what it is.”

Swan refuses to stand in the way of the connection, trusting in her heart and her gut, allowing her mind to follow. The result, at 83 years old, is a diverse collection, filled with vibrant and fantastic situations, in which readers find their own deeply rooted connection to the extraordinary life moments of Swan’s unique collection of characters.

The Bam is Back