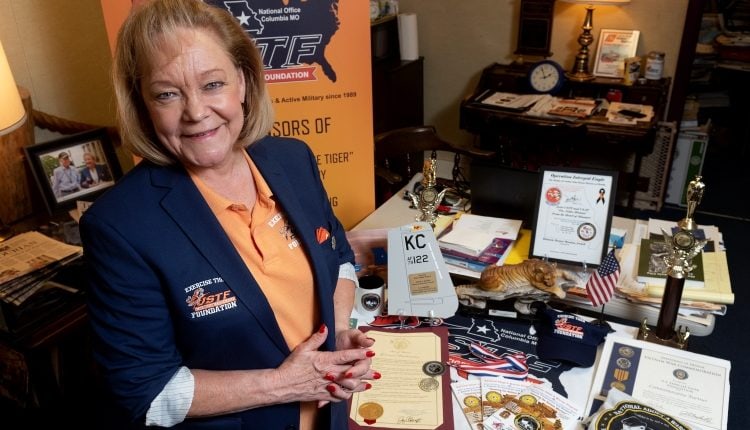 Haines is the national executive director of an organization called Exercise Tiger, a role that she refers to as a “passion.” Exercise Tiger was part of the World War II D-Day invasion plan that, unlike some of the more famous actions from that fateful day, was sworn to secrecy for nearly 40 years. Haines’ organization prides itself on recognizing not only the veterans who survived this exercise, but also those who paid the ultimate price and gave their lives while serving in it, including many Missourians. (Missouri sustained more casualties in this exercise than any other state.)

Locally, the Exercise Tiger organization is responsible for creating a national memorial on the grounds of the Audrain County courthouse, as well as getting the portion of Highway 54 running from I-70 to Mexico renamed the “Exercise Tiger Expressway.” Nationally, the organization hosts a number of ceremonies across the country each year, and recently the U.S. Coast Guard has become involved, laying memorial wreaths at sea to mark the anniversary of the exercise.

The organization hosts an Adopt a Warrior benefit, which is an annual event that honors military veterans and active-duty service members at a red-carpet event. This was the 21st annual event and was hosted at the historic Tiger Hotel on Nov. 15. Those nominated for this award are done so by their commanding officers and all that are eligible receive the Medal of Combat Valor. Exercise Tiger also seeks to recognize the efforts and sacrifices made by military dogs, and annually awards the Silver Tiger K-9 Medal of Honor award.

“Our veterans … and those who serve today met challenges and overcame them … the USTF (U.S. Tiger Foundation) takes pride in honoring all veterans and active troops, [including] canines,” Haines says. In fact, they are one of the only military organizations that honor active duty army and Air Force canines.

“We are a forgotten warrior foundation,” Haines says. “We overlook no one – our state and national veterans and military members are our most prized possession and resource.”

Remarkably, despite dedicating so much of her time and effort to Exercise Tiger, Haines has also been a longtime volunteer with cancer patients, particularly women undergoing the effects of chemotherapy. Haines and her husband, who had been a naval petty officer, opened the Captain’s Quarters salon in Columbia more than 40 years ago, in 1977.

Eleven years later, in 1988, Haines was devastated to learn that her sister had been diagnosed with seven different types of cancer simultaneously. This news immediately spurred Haines to take action, using her skills as a stylist to help provide hair stylings and create wigs for women undergoing the side-effects of chemotherapy. Shortly after, Haines partnered with the American Cancer Society’s “Look Good, Feel Good” campaign, a program that assists cancer patients with make-up tutorials and other means of regaining confidence that may have been lost during chemo treatments.

Haines tragically ended up losing her sister. However, she made a promise to her sister that she would continue with this program, as it made such a positive impact in so many lives.

Haines’ work with the American Cancer Society was so impactful, that in 2008 she was awarded with the Missouri State Sunrise Award in recognition of her contribution to helping cancer patients across Missouri. Two months later, Haines received the same award, this time on the national level.

Susan Haines is a tour-de-force when it comes to serving others and her volunteer efforts are most definitely a way of life for her. “When you love what you’re doing,” Haines says, “it’s not a job.”