Changes are underway at Columbia mainstay Chris McD’s — not the least of which is new ownership. After 30 plus years, founder Chris McDonnell felt ready to pass the torch, which occurred this past December when he sold to Tyler Spurgeon.

Spurgeon’s partners in the venture are Tina and Dr. Mike Maurizi, his soon-to-be parents-in-law. Spurgeon says, “This is Mike’s favorite restaurant. He and Tina come in every week, sometimes twice a week. They usually sit at the same table.” When he ran the idea of owning Chris McD’s past the Maurizis, they were on board. “They knew it was a great investment, even if the restaurant industry is kind of hard right now,” Spurgeon says. “Chris McD’s has a great following and knowing that Chris would be showing me the ropes, it was kind of an easy decision.” Spurgeon’s fiancée, Claire, was also on board. “She’s super pumped about it. Super supportive,” he says.

Of selling after 31 years, McDonnell says, “I had a great run. … (Spurgeon) couldn’t have taken over at a better time. We have the best trained staff; a really good crew that’s committed. (Spurgeon) is liked and respected by the employees and they’re excited about the changes coming.”

He adds that Chris McD’s is always busy, and Spurgeon has a very good chance of being successful. Even though McDonnell won’t be in the kitchen at Chris McD’s for too much longer, he has no plans to quit cooking. However, he says, “I don’t think I’ll ever own another restaurant.” 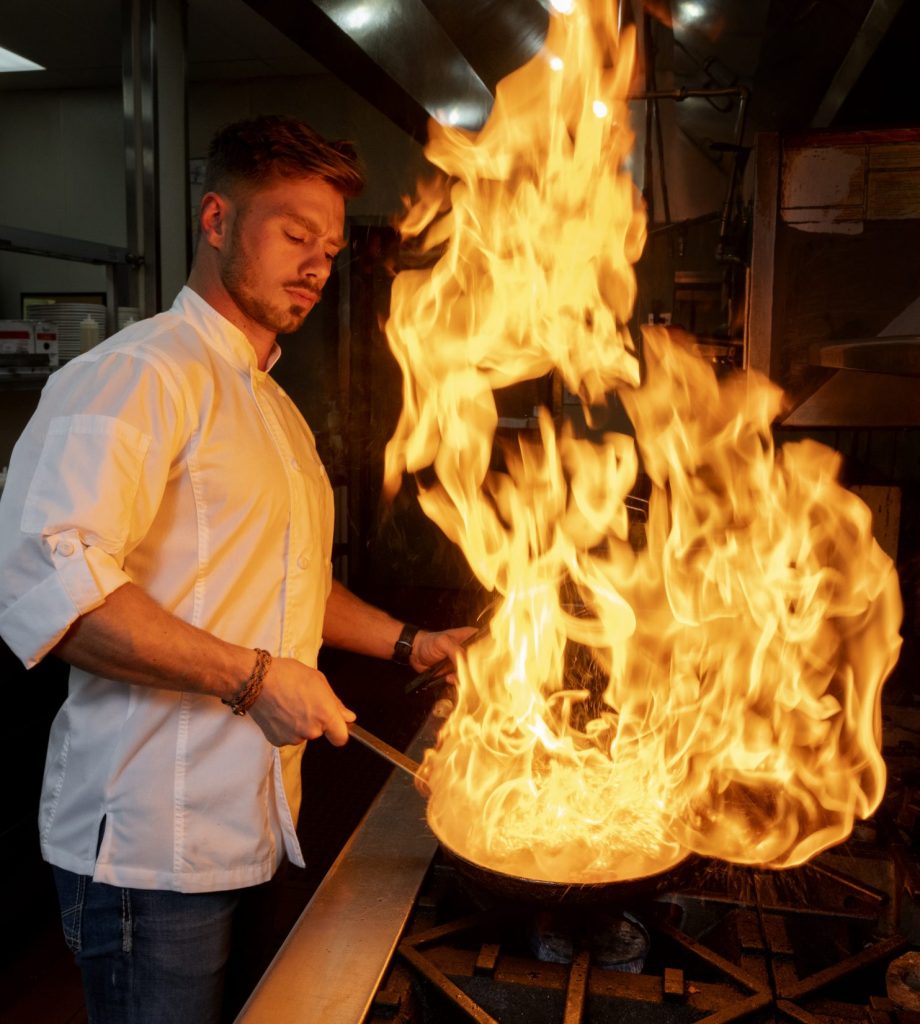 As with all restaurants, the hours and effort involved are intense. But Spurgeon is unphased. “It makes for some late nights,” he says, “but it’s not too bad.” It helps that Chris McD’s is only open Wednesday through Saturday and that the kitchen closes by 9 p.m., depending on the day.

For new owner Spurgeon, life has come full circle. He started working at a restaurant in the New Bloomfield area at 14 and continued moving up the ranks. Despite an opportunity to assume the reins after graduating high school, he instead joined the Marines. A yearlong posting in Japan followed and he came back to Columbia to study exercise and nutrition at Mizzou.

But he found that area of study wasn’t quite for him and began trying a myriad of other jobs in everything from construction to mechanics. But none of them lit a fire in him the way cooking had. He realized he wanted to get back behind the stove and applied at “several of the nicer places in town,” including Chris McD’s, the restaurant where he most wanted to work. He was about to accept an offer from another eatery when he got a call from McDonnell himself. “Why here?” McDonnell asked. “Because I think you’re the best chef in town and I want to learn from the best,” Spurgeon replied.

Hungry to do more now that he was working in the career he loved, Spurgeon asked to meet with McDonnell and let him know that “if you’re serious about hanging up the apron, putting up the knives, I’d like to take over and continue your legacy.”

Spurgeon assured McDonnell that he didn’t want to change the menu drastically. “This will still be Chris McD’s,” he says. “McD’s is known kind of as a steakhouse, a seafood house. So putting out really good steaks, awesome seafood dishes is kind of the main goal here.” But Spurgeon says they could add to that with some “really cool French or Italian dishes” or even some staple comfort food.

McDonnell and Spurgeon came up with a game plan for moving forward: McDonnell would stay on for at least six months and “serve as a consultant to show and share his 30 years of experience that made him the best in Columbia,” Spurgeon says.

While keeping the menu largely the same, Spurgeon says there are other exciting changes in store for the brick-and-mortar restaurant.

For starters, the entire interior will be completely renovated. New tabletops, new bar, new decor — the works. This will be done in phases so regular service won’t be interrupted. In addition, the patio will be expanded into a larger three-season space, complete with in-table firepits, a covered roof and heat lamps.

McDonnell is hardly out of the kitchen yet. Spurgeon says most nights the eponymous chef tries to step out to the front of the house once or twice “but he knows and I know, that the job’s in the kitchen. It’s not meet and greets and stuff like that. It’s putting out quality food and that’s what people come here for. Some nights, he doesn’t even come out of the kitchen at all!”

When asked if any of his studies in exercise and nutrition might come into play, Spurgeon laughs. Although he regularly works out, he says, “The style of cooking here is French and if anyone knows French cooking, it’s cooking with butter sauce. A lot of sauces, a lot of rich foods, stuff that people just really, really like.”

Barbecue Fundraiser Set for Next Week