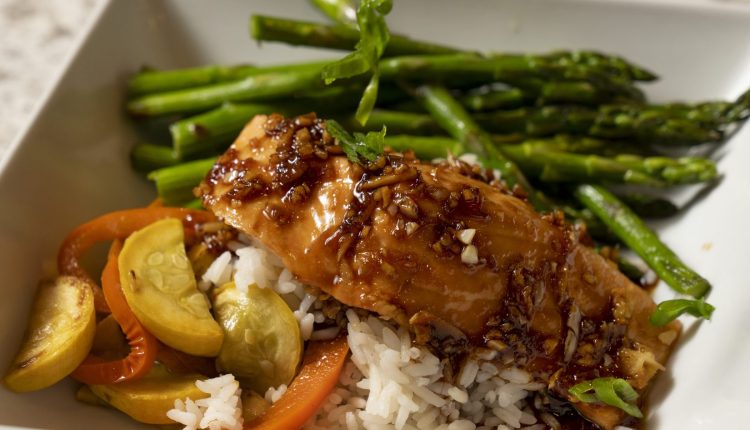 Getting people to eat salmon in the Midwest can be hard. I know, I grew up in the Midwest. As a kid, my diet mostly consisted of Midwestern food, until I was about 5 or 6 and we went to California to visit a relative. My parents told us that they didn’t have hamburgers or hot dogs on the coast, so we had to eat shrimp, fish and other sea-dwelling things.

Little did they know, this would backfire. Once we got back, we still 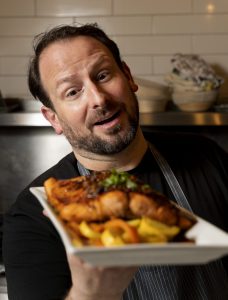 wanted seafood, which of course was much more expensive in the Midwest.

Sometimes, people are turned off by seafood because of a one-time overly fishy-smelling experience. A strong fishy smell typically means seafood that is ending or past its prime. I vividly remember taking a tour of a culinary school in New England when I was 17 and was asked by a chef what the inside of a day-old whole salmon smelled like. “Fish!” I replied. The chef then told me it smelled like a fresh cut melon.

I can imagine that I had a face of disbelief because the chef then picked up a whole 20-pound salmon and asked me to come up to smell it. I stuck my nose so far into the salmon, as I was sure that the farther I stuck my nose, the more of a chance I would have to catch a fishy smell. Alas, the only smell that I could detect was fresh melon.

This recipe is a great segue into seafood, as it has saltiness and sweetness, while letting the great flavor of salmon come through. It works well for cooking one or two individual portions, or a larger fillet of salmon to serve family meal style. The ingredients are the same, but the technique is slightly different, both with the same delicious result.

Depending on where you are, the wild salmon season is typically late April or early May through October. You can find a much larger variety of salmon available then. Farm-raised salmon will be more available throughout the rest of the year. My preference is portions that are about 2-inch to 2 ½-inch thick, and fillets (whole sides) that are on the thinner side, closer to 1 ½ inches. I find cooking the individual portions goes faster than you might think but glazing it while cooking a whole fillet (or side) of salmon goes a little slower.

Skin or no skin is more of a preference, it does take a little more technique for making it crispy, but I love the crisp result. Removing the skin takes a little practice but is easier than you would think. If you don’t want to bother with it, it will come off very easily once it is cooked. Just be careful, the salmon will have become extremely delicate during the cooking process as well.

Remove the skin from a tranche or portion of salmon — from the side, use a knife and carefully cut just above where the skin attaches to the meat of the salmon. Use the knife to scrape off the skin at a slight angle (as you might brush the dirt off your desk but add a little forward and backward wiggle to it). This method also can be applied to a whole fillet or side of the salmon.

The glaze is pretty easy: add all of the ingredients and simmer until it thickens. You may have to play with the heat a bit. Depending on your range and size of the pan, you may need to have a little higher or lower heat. You need to have the heat high enough to reduce the sauce (evaporate moisture to thicken and intensify flavor), but not high enough to burn or crust on the side of the pan. If you see the sauce starting to burn, turn down the heat, but DO NOT scrape the sides back into the sauce, it will just end up tasting burnt. If you want, the glaze can be made beforehand, even in larger batches, and frozen until needed.

Cooking one or two portions at a time is easy. It can be done in one pan and can quickly go from the fridge to the plate with minimal effort. You can start the salmon in the pan with a little oil, add the ingredients for the glaze, baste the salmon, then take the salmon out, put it onto the plates and finish the glaze by itself in the pan.

Your pan and your oven or broiler are what limit how large of a piece of salmon you can cook. I find it sometimes easier to make the glaze a day or two beforehand. It may be a little thick when it is cool but will thin once the glaze starts hitting the warm salmon. The salmon cooks best going into a preheated oven for four to five minutes, then removing to preheat the broiler, then back in to broil. Once you have baked and broiled, you can brush the glaze on the salmon just as it is finishing under the broiler. Remember, all of the glaze does not need to go on now. Use just enough to start sticking to the salmon to help flavor it. The rest of the glaze can be put on once you have the salmon on the platter to serve. 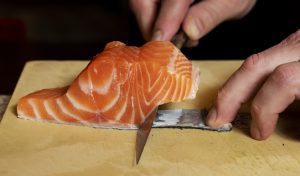 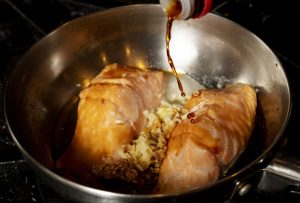 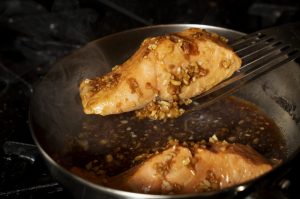