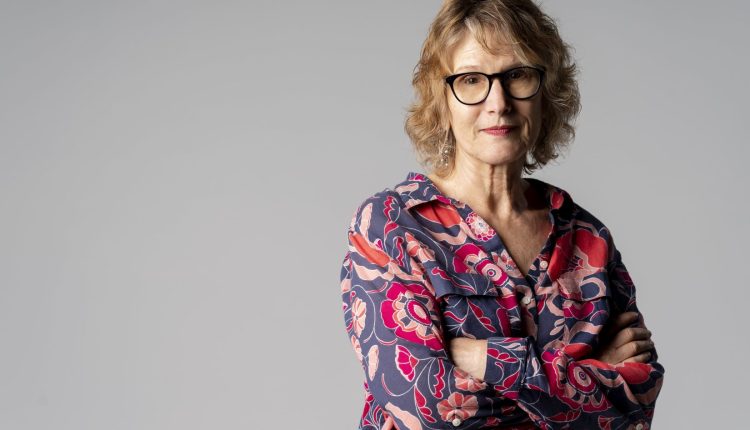 Lynne Jensen Lampe’s debut poetry collection revolves around one topic: her relationship with her late mother. Many of us can claim complicated relationships with one or both parents, but Lampe’s experience was shaped by the medical landscape of the late 1950s and ‘60s. And her first book, Talk Smack to a Hurricane, is a collection of poems through which Lampe has been able to process her childhood and the trauma her family experienced over the years.

In 1959, right after Lampe was born, her mother experienced what Lampe calls an “inexplicable mental shift” that put her in a psychiatric ward for the first year of Lampe’s life, away from her husband and newborn child. While Lampe says that a similar situation today would likely be considered a temporary postpartum mental health issue, at that time it instead led to an eventual diagnosis of schizophrenia and bipolar disorder that would lead to many different hospitals and treatments. “Psychology and medical care were very different then,” Lampe says. “I had a lot of anger about the things my mother went through.”

Lampe’s interest in the written word goes back to her childhood. While her parents always read to her, it was her grandfather, an engineer by trade, who helped spark a real interest in it. It was through his collection that Lampe discovered her love of limericks and began to dabble in creating her own.

As Lampe got older, her interest in writing developed and she eventually decided to study journalism, which is what initially brought her to Columbia. And when she first began to think about writing a book, Lampe says she planned to write more of an investigation and history of medical care and psychiatric treatment in the 20th century to further explore what her mother experienced. But while researching, Lampe says she realized that there wasn’t really new ground for her to cover in that area, though it was helping her learn more about her mom. And she kept writing poetry.

Through writing, Lampe says she was able to truly delve into her own emotions and trauma from her mother’s struggle with mental health and treatment. “Part of my shame was my feeling that my mother wasn’t like the other moms,” Lampe says. The work also has allowed her to explore what her mother’s perspective may have been, using a combination of her own memories, old letters and simple conjecture. “In writing, you discover how you feel,” she says, noting that you have to be honest with yourself first in order for the final product to have emotional accuracy. “A poem has a life, it’s an entity. … I keep at it until it gathers its energy.”

Lampe hopes readers will understand that her work is not a rejection or repudiation of her mother, but a tribute to all that she endured. “I’m hoping that people understand how much I love my mama,” she says. “The love was always there but we didn’t always see it.”

She also hopes people will see the importance of continuing to investigate the way women are treated in power relationships, where another person is able to exert control and influence over their decisions. “I see that theme coming out over and over again,” she says.

By completing the collection in Talk Smack to a Hurricane, Lampe says she also hopes she’ll be able to start writing about new and different topics, maybe even focusing on her father, who spent much of his adult life as a strong advocate for his wife, even taking the time to educate himself in the medical field.

Copies of Lampe’s debut poetry collection can be purchased at Skylark Bookshop and at Yellow Dog Bookshop, through Lampe’s website at lynnejensenlampe.com or icefloepress.net