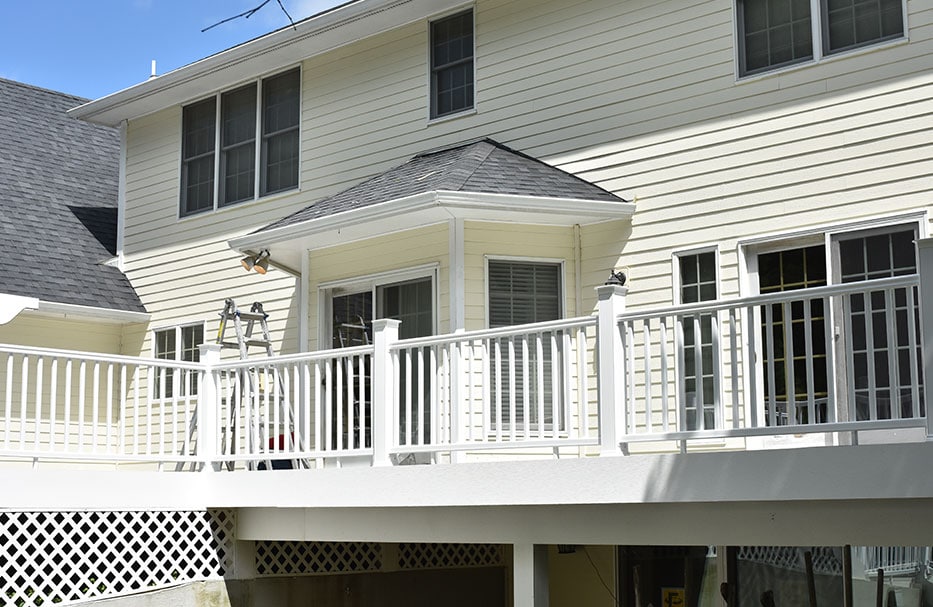 A distant howl pierces through the darkness. Christi peaks her head out of the sliding door in the kitchen to call for the family dog, Pepper. The night falls silent. Concerned that Pepper has found herself following her nose into a neighbor’s yard, Christi heads outside to the porch to call her in.

Under her steps, the wood of the patio creaks and bends as she thinks, “I don’t feel safe.” Just as the thought comes across her mind, a loud crash rattles before her, shaking the world around her. After catching her breath, Christi cautiously steps forward to the source of the sound when she sees it. The steps leading from the patio to the yard have collapsed.

This isn’t the beginning of a horror story, this is a description of the actual deck behind Stephen and Christi Brietzke’s home in the Highlands in south Columbia. Most homeowners have a general awareness of the maintenance required to sustain the structure and integrity of a large wooden deck, but over the years the upkeep can become as costly as it is time consuming.

Cleaning, repairing, washing, and staining chores each have their own time line to be completed giving even the most organized homeowner a myriad of tasks to schedule. In Stephen and Christi Brietzke’s case, the decision was made to build a new deck structure that will have a lasting bright look with little seasonal maintenance.

Enter Nick Allen, owner of Manor Roofing & Restoration Services. Having previously worked with Stephen and Christi to address concerns about the roof and siding of their home, Stephen and Nick had talked about building a new deck for over five years. Nick had long thought about deck construction as a logical transition to grow his business but hadn’t found the right project to begin. After the collapse of the stairs however, the time was now.

Due to the cracking and rotting of the current wood, the first step of the project was deceptively simple: Remove the entire deck. By building from scratch, Stephen and Christi were able to create an outdoor space more inviting by selecting softer colors. A new frame was then constructed using Timbertech, a composite building material made from wood and plastic sealed with a protective pre-finish. Ultimately, Nick selected Timbertech because of its durability to resist mildew and mold without requiring a lot of attention and only occasional cleaning.

From there, a Radiance Rail was installed along the border of the deck including the stairs and landing — a much-needed improvement from the loosened handrails with weak, rusted joints held together with bungee cords. Once the base structure was completed, the whole deck, including the old support beams, were then wrapped in PVC trim board to match the color of the deck foundation.

The goal of the project according to Nick was to, “expand square footage to the livable space for the home.” To pursue this objective, some space on the deck was reconfigured. The stairs were designed to lead to a small landing in the yard. A large, decrepit hot tub, no longer in working order, was removed from a concrete landing at the bottom of the steps in the yard. In its place, the team at Manor Roofing & Restoration built a circular stone fire pit underneath a pergola. What was once unused space now serves as an entertaining area for the Brietzkes, who can escort guests out into the backyard without fear of total structural collapse.

Work began in mid-March for the back siding of the house. All together, that and the deck construction took around four weeks to complete — even with 14 straight days of rain. The result has taken the back face of the house from grim and drab to a lighter beach-like appearance.

Manor Roofing & Restoration is now including deck building in their list of services. The success of the Brietzke project served as validation for using Timbertech to put together strong structural bases. For Stephen and Christi, with this dream project now completed, they look forward to hosting guests for summer nights and barbecues.