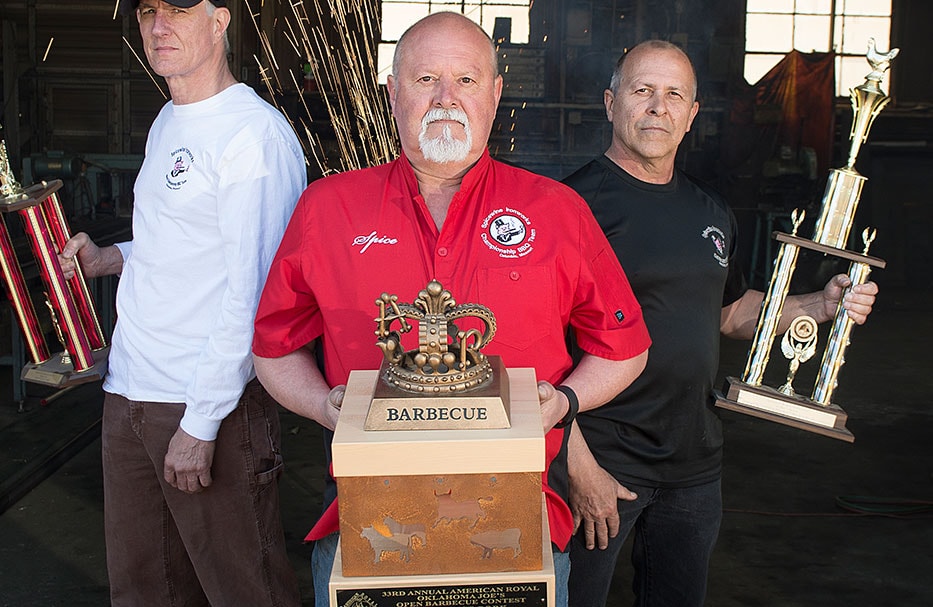 The 2017 winner of the best barbecue sauce in the world is right here in Columbia. Jay Curry, creator of Spicewine Blue Collar Barbecue Sauce, got top honors out of 606 entries from 43 states and 13 countries.
What did it feel like to win? Well, the glory is yet to come. Curry will be on stage to accept his award at the Kansas City Royal World Series of Barbecue on Labor Day among the top barbecue cooks in the world. But deep down, Curry said, the best part is the validation.

“Taste is so subjective,” Curry said. “I always doubt myself. When I won top honors in 2009, I thought maybe it was just luck, you know. But when I won again this year, I thought I must be doing something right. It was confirmation.”

Spicewine Blue Collar sauce earns its name by being a hardworking sauce. It’s a Kansas City-style sauce, sweetened with molasses, that goes well with everything. “It works hard to be good with all varieties of meat,” Curry said. “A lot of sauce hit the trash before I got it just right.”

Curry, who is a welder by trade, started out making insulated smokers along with his brother, Steve Curry, and Randy Ham. They formed Columbia Welding & Machine and Spicewine Ironworks. The business flourished and the smokers are now found all over the country and in England and Australia. Jay decided to branch out. Inspired by the formidable cooking of his mother and grandmother, he got into barbecue, sauces and rubs about 13 years ago.

The Kansas City American Royal World Series of Barbecue has been held for 38 years and is one of the best-known barbecue competitions in the world. The sauce contest took place in May and the cooking contest is held each Labor Day. This year’s contest and festival will be held at the Kansas Speedway. The Kansas City American Royal, a non-profit corporation, uses proceeds from the contest to fund youth scholarships and promote agricultural education.

Seventy judges participated in the blind judging for the world’s best sauces. Blue Collar beat out “Lotta Bull,” “Loot N’Booty” and “Smokey ‘Burbs” sauces, among other descriptively named mild tomato condiments. Judges taste the sauces individually and with meat. They award up to 36 points based on appearance, texture and taste.

Curry will take home $400 and a trophy that will join dozens of other trophies and ribbons in his office. The real reward, though, is the legacy he’s passing on to his children and grandchildren. “My kitchen is my most favorite place to be,” he said. “And the best part about it is the fact my kids and grandkids have something of a legacy they can remember me by. It’s something special I can give them.”