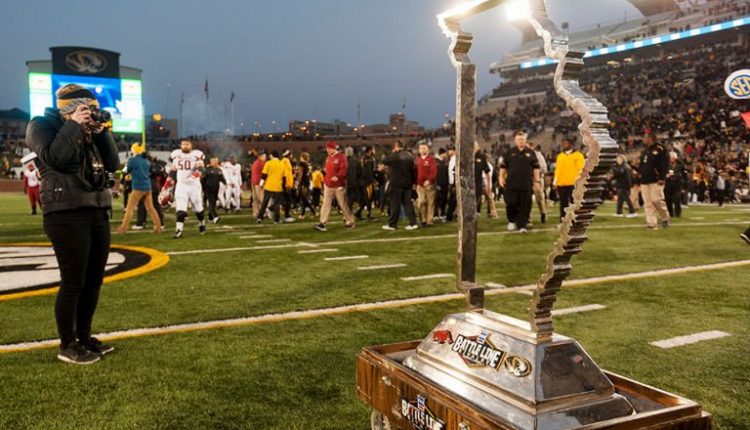 “When you [only] win four games, guys, believe me, it hurts your soul,” Odom told reporters at SEC Media Days in Hoover, Alabama.

The hype entering that game got a little extra juice when Mizzou linebacker Eric Beisel guaranteed victory against a Razorbacks team that finished 7-6. Beisel was one of three Tiger players who also made the trip to Hoover in July.

“For the Arkansas beat writers, I brought Beisel,” Odom said. “I understand we’re supposed to flame that rivalry a little bit up. You’re welcome in advance.”

“I had no doubt that we were going to win that game,” Beisel said. “They want to come to our house, they want to step on our field, they want to run through the A-gap. Well, you’re gonna get hit in the mouth.”

“It’s disrespectful to step on the field at the University of Missouri and think you’re coming out with a win.”

Beisel worked his way into a starting role by the end of last season, finishing with 44 total tackles. Odom says Beisel has been a presence in the locker room ever since the win against the Razorbacks.

“He’s done a great job towards the end of the year last year on being put in position to go lead our football team.”

Beisel says his focus is on getting the Tigers back to the SEC title game.

“Some people call me confident, cocky. You can call me arrogant, but you can never call me selfish.”

It may never replace the rivalry with that school to the west, but Odom sounds like he’s looking ahead to making some new enemies in a relatively new conference.

Mizzou heads to Arkansas on Nov. 24. We’ll see if there’s more on the line than just the promises of a certain black-and-gold linebacker this season.

Brad Tregnago is the news director at 93.9 The Eagle and is a radio broadcaster with the Tiger Radio Network.