Before you grab that orange can of Libby’s® pumpkin puree from the grocery store shelf, we’ve got news for you: You can get most of your Thanksgiving meal ingredients from local farmers right here in mid-Missouri. And while we all enjoy the entire meal at Thanksgiving, let’s be honest: The best part is always the pie. That’s why we’ve rounded up four mid-Missouri businesses that grow ingredients for your holiday pies, from the always appreciated apple to the somewhat surprising sweet potato. And, we asked the experts for some tips and tricks on making the best crusted desserts this fall.

Not only are you supporting small businesses by purchasing directly from farmers in the area, but you also get the full experience, from picking out the perfect pumpkin to roasting and scooping out the filling all the way to putting that perfect dollop — or mountain — of whipped cream on top. This fall, round up the kids, a group of close friends or go solo and embark on a mission to create sweet memories certain to last longer than the pie! 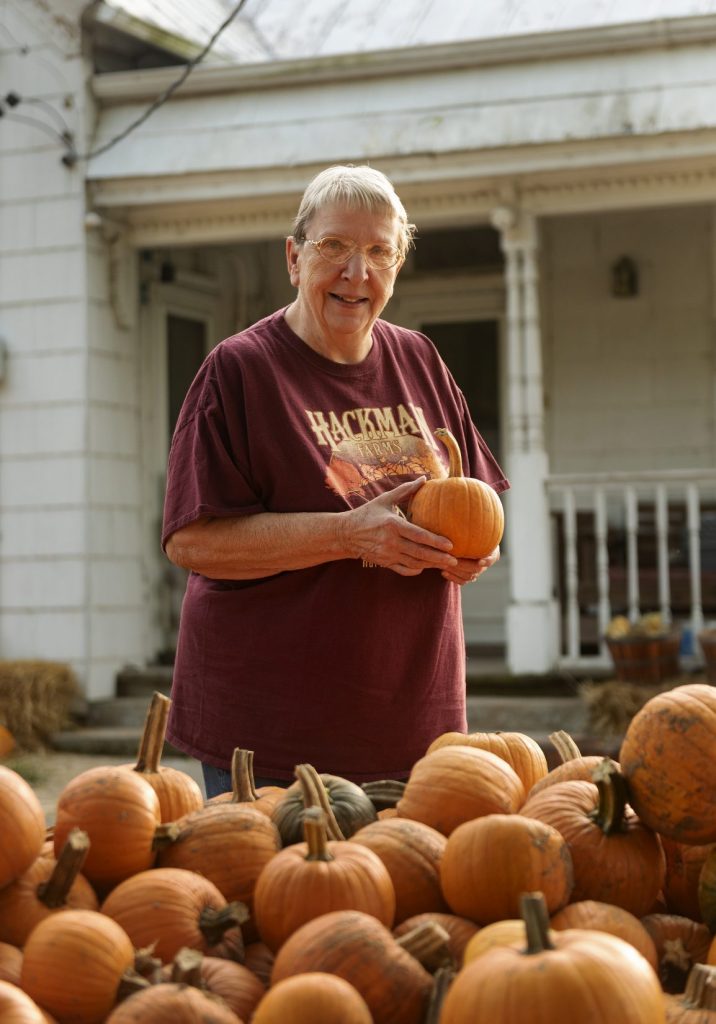 Jo Hackman and her late husband, Norlan, started Hackman Farms in 1979, first selling cantaloupes and watermelons out of the farm in Hartsburg. “I had no previous farming experience,” Hackman says. “But my husband did, and he’s the one that started it.” She still grows cantaloupes and watermelons each year, but perhaps what the farm is most well-known for is its pumpkins.

Hackman grows around 10 varieties of pumpkins, ranging from miniature decorative pumpkins to pie pumpkins and carving pumpkins, all the way to behemoths. “Some of our pumpkins can get to 150 to 200 pounds,” she says. Typically they grow and sell around 100 of the giant pumpkins to customers looking for something a little different.

When it comes to pie making, technically you can use any variety of pumpkin, Hackman says. “But there is one variety called Dickinson that is buff colored that they say is the best for cooking. That’s the one that Libby’s uses in their canned pumpkin.” In fact, the Dickinson pumpkin has long been a point of contention in the pumpkin world because it is technically more similar visually to a squash than a pumpkin. But, who are we to say? It tastes delicious regardless.

In a typical year, Hackman is too busy managing her business to use her pumpkins in pies, but plenty of other mid-Missourians get to enjoy the fruits — or vegetables — of her labor.

As a former committee member and co-founder of the Hartsburg Pumpkin Festival, Hackman typically sells her pumpkins at the annual festival, but it was canceled this year due to COVID-19. Instead you can purchase pumpkins directly from Hackman Farms in Hartsburg this fall. 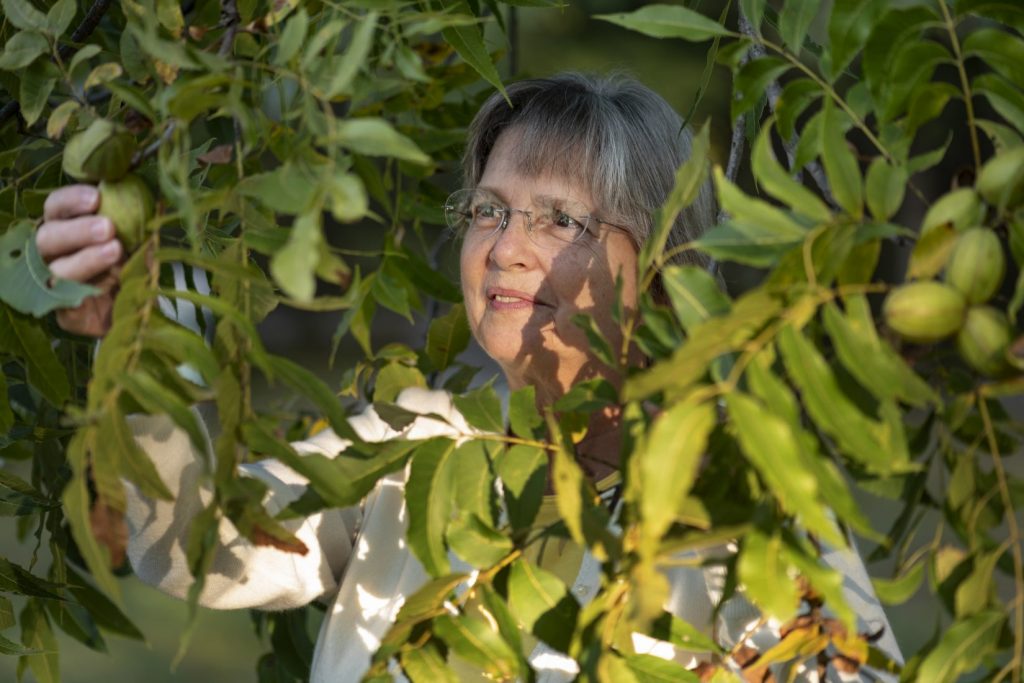 Owners Randy and Ronda Thiessen have owned Sandy Creek Farm since 1992, where they first started selling iris rhizomes at the Columbia Farmers Market in 1993. “Each year we would change what we grew and sold as we learned what customers wanted,” Ronda Thiessen says. Randy Thiessen worked at the University of Missouri’s research farm in New Franklin in horticulture and agroforestry, where he learned to plant and graft trees. After they purchased the farm, he put his experience to use planting seeds and grafting different varieties of fruit and nut trees. 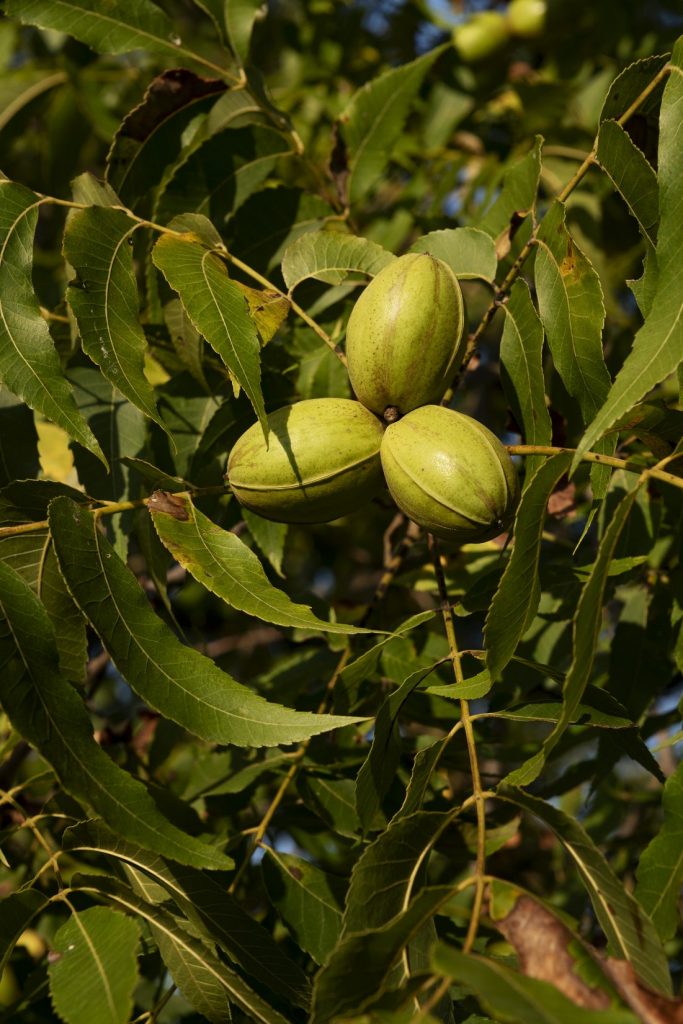 When it comes to pecans, the Thiessens grow a multitude of varieties — seven to be exact — including Kanza, Goose Pond and Missouri native. It takes six to 10 years before the trees produce enough nuts to harvest. Pecans are ready for harvest in the late fall/early winter when the nuts fall to the ground, either by natural forces, such as wind and rain, or with a little persuasion from a tree shaker. The nuts are then picked up either by hand or with a tool that gathers them and are then sorted by size, sent to the processor to be cracked, taken out of their shells, packaged and frozen.

One tip Ronda shares for utilizing pecans is to make sure you either keep them in the fridge or freezer to maintain freshness before using. Once you do pull the pecans out of the freezer, try using maple syrup in your pecan pie recipe instead of corn syrup for a better flavor, she suggests. “Maple syrup is thinner than corn syrup, so there are a couple tricks for the perfect pie,” she says. “Blind baking the crust ensures the thinner filling doesn’t seep to the bottom of the pan, and adding one tablespoon of flour into the filling mixture helps it set.” For the recipe Ronda uses, check out the Maple Pecan Pie from Sally’s Baking Addiction online. 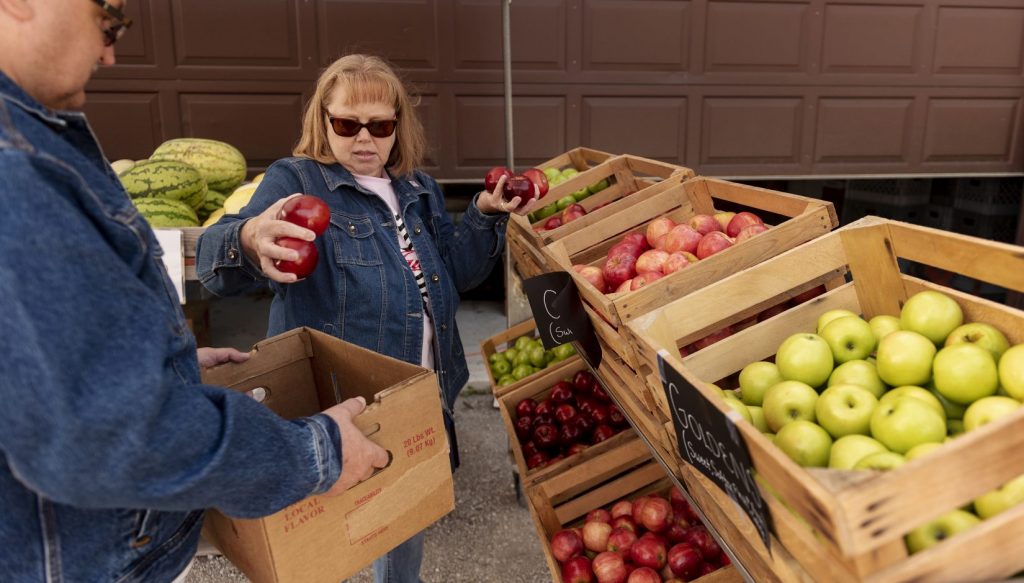 Brandt and Kelsey Schisler have owned Hickory Ridge Orchard since fall 2017, but Brandt’s farming experience goes back much further. He grew up on a traditional row crop farm in central Illinois growing corn, soybeans, wheat and cattle. After a move to Colorado, he became interested in beekeeping, pumpkins and apples and began dabbling in all three. This experience, coupled with reading a lot of books and getting advice from other farmers, enabled him to begin Hickory Ridge Orchard with Kelsey. 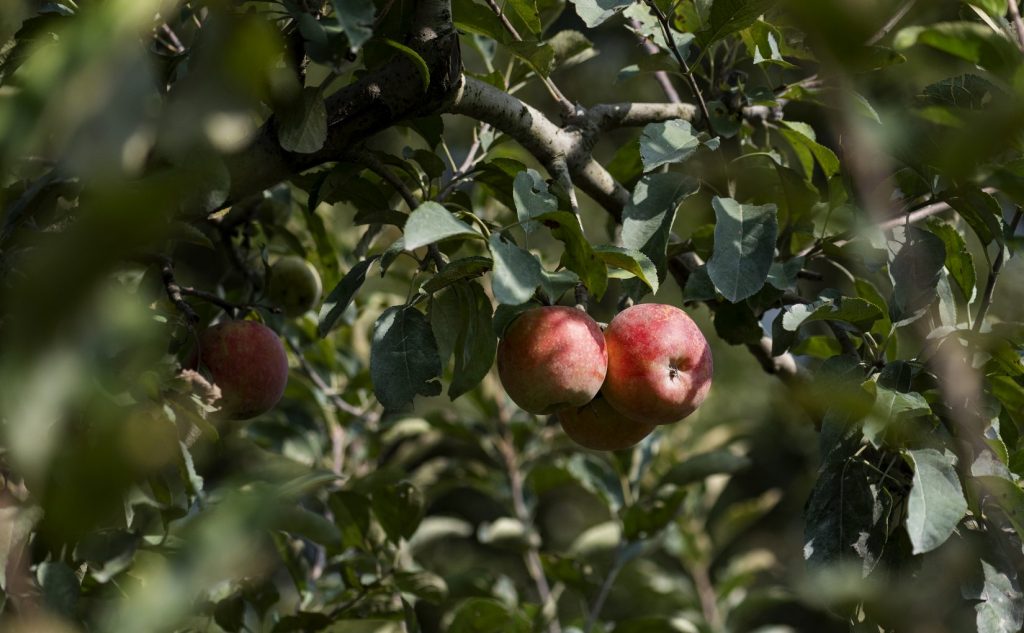 The Schislers grow 24 varieties of apples, ranging from Gala to Empire to Arkansas Black, but the best for pie-making are firm apples with a high brix measurement, Brandt Schisler says. “Brix is the measurement of dissolved sugar within the solid,” he says. “Some of my favorites for pie making are Goldrush, Fuji, Gala and Jonathan.” The range for Apple harvesting season is anywhere from the end of July through the beginning of November, depending on the variety of apple and the weather.

Brandt and Kelsey are currently almost halfway through the process to become certified organic — if they complete the certification, they will be one of only two organic apple orchards in Missouri — and are learning the challenges that come with those standards and regulations. When it comes to farming, the work is never done, and that’s certainly true for apple orchards. The couple is planning on planting 1,200 new apple trees this coming spring.

When embarking on a homemade apple pie adventure, be sure to always peel your apples beforehand, he recommends. “The skin doesn’t always break down during the cooking process. The best tip I have is to mix multiple apples into a pie as it adds more flavor depth.”

Find Hickory Ridge Apples at the Columbia Farmers Market or at their orchard in Mexico, Missouri.

Tammy and Greg Sellmeyer have owned Sellmeyer Farm in Fulton, Missouri, since 1986. They both have a farming background — Greg grew up on a farm with livestock, such as hogs and cattle, and Tammy spent a lot of time at her grandparents’ small farm with dairy cattle, chickens and row crops. During their ownership of Sellmeyer Farms, they’ve added different fruits and vegetables to their repertoire but perhaps most impressive is the number of varieties of sweet potatoes they now grow: 80 to 85, depending on the year. 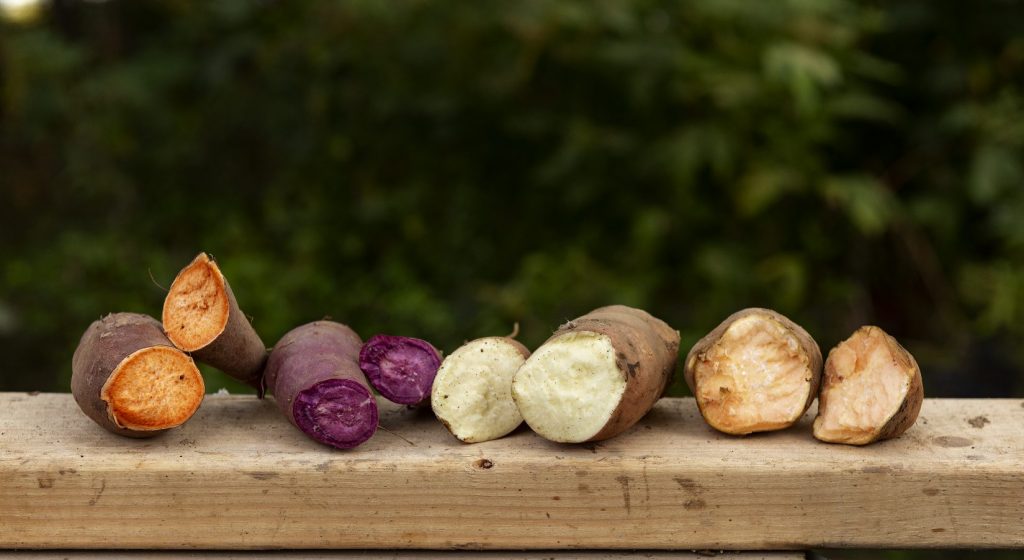 “We have four different flesh colors of sweet potatoes,” Tammy says. “White, orange, purple and yellow and within those four colors, we have different varieties.” Purple sweet potatoes are a little denser and have a more earthy flavor, she says, while their oriental varieties with white flesh tend to be drier and a little sweeter, such as the Murasaki varietial. Even within the “typical” orange sweet potato, the flavor and texture can vary drastically depending on what variety you choose. “Our Georgia Jett sweet potato is extremely moist and creamy, so a lot of people really like to make baby food with it,” she says, “We also have some varieties that are what we call ‘super sweets’ such as the Mayhem Bradshaw.” Sweet potato harvesting (digging) typically begins in mid- to late-September and wraps up in late fall. 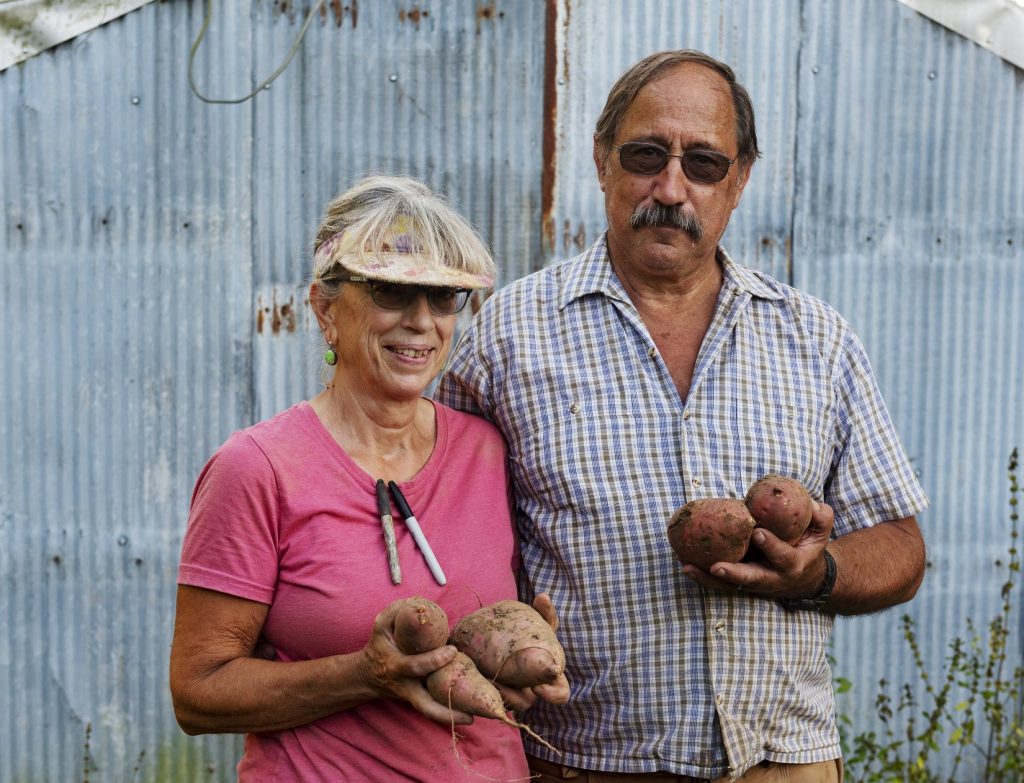 When it comes to choosing the best sweet potato for pie-making, you really can’t go wrong, Tammy says. “I like to mix a variety of sweet potatoes for my pie — I don’t stick with just one. I had a customer a couple years ago that did one pie that was half purple potato base and half yellow base and that was really bright and interesting, so it’s whatever you’re looking for.” One tip she shares is to save leftovers from roasted sweet potatoes in your freezer. If you find that the potatoes you boiled or roasted for dinner are too big for your appetite, simply mash the leftover potato and freeze. When you’re ready to make pie, you can defrost the mashed sweet potato and proceed as usual. Tammy’s recipe uses sweetened condensed milk, eggs, spices such as cinnamon, nutmeg and cloves and of course, sweet potato.