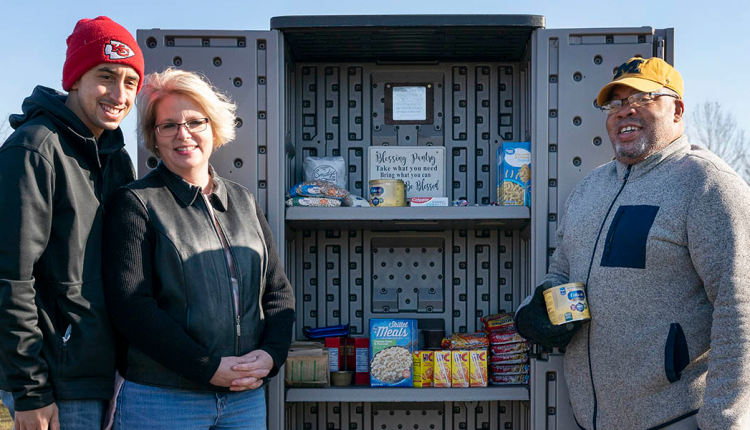 Meet the Couple Behind The Blessing Box Program

Wayland and Renee Taylor have been working tirelessly to feed hungry communities in Columbia and Boone County, especially those who have been hit hardest by the pandemic. One major way they have contributed is by helping co-found Reborn Blessing Boxes of Boone County.

These boxes function as pantries that have mostly non-perishable food items such as cans of soup, vegetables, loaves of bread an snacks. These boxes feed the homeless population, families with small children, juvenile runaways, people on disability and the elderly. In addition to food products, some pantries also store gloves, blankets, hats, first aid kits, diapers and even menstrual products. Since its inception in the fall of 2020, 10 Blessing Box pantries have been put up in Columbia.

Along with direct donations, Renee Taylor manages any sponsorships or monetary donations that come in. Many local business and churches have donated money to the program, helping to build the construction as well as the stocking of boxes. Some organizations, such as Zeta Phi Beta, a sorority of the University of Missouri, will sponsor a pantry, which means that they both helped fund and they steadily gather and donate food items as part of their philanthropy.

The Taylors have dedicated their lives to feeding the hungry. In doing so, they have connected with a rich network of people also dedicated to the same principle whom all work together to make it happen. One of the people who they have met through this network is Rev. James Gray, who is the associate pastor at Second Missionary Baptist Church. He was collecting food for a family he knew personally when the Taylors stopped by to drop off their contribution as well as talk to him about helping on a grander scale. “We wanted to do more, we’ve worked with the homeless for years — we really felt compelled to do more food wise,” Renee says.

After speaking with Gray, just a mere week later they had put up their first Blessing Box. “He’s [Gray] got the point of contact, he takes care of the legalities of getting the property and then we do the structured work and get the food to come.” Wayland says. While Gray clears any bureaucratic red tape, Wayland constructs the boxes and bases, ensuring that it will stay put no matter the weather. Renee makes hand-crafted signs for each box and places her business cards inside, both for those who may want to donate and for those struggling who need more help. Both Taylors monitor and fill the boxes as many times as they can in a day to ensure that no one goes to bed hungry. In addition to creating and filling their own pantries, they still continue to help other pantries in their network.

Renee Taylor writes their motto on each sign: “Take what you need, bring what you can.” This creates a chain reaction of people helping other people, but more importantly it creates a sense of community. “We’ve never worried about filling a box, because the donations will keep coming in,” Renee says. “It’s all about making an impact, even in a very small way.” She says, “Children have come up to me and said, ‘Thank you, if you didn’t come, I wouldn’t have had lunch or even a snack today!’ We’ve had families and homeless in line share amongst themselves — it’s taught me so much about life,” she continues.

Along with monetary donations and sponsorships, the Taylors say there are many ways to get involved and it starts with simply putting food donations in one of the many pantries around town. “If you have a donation, put it in the pantry — it’s an experience,” Renee says. According to her, putting a donation directly into the pantry is a way to see first-hand the impact that direct donations can have. Renee Taylor saw that impact when talking to a woman in need who told her that the pantries were instrumental to helping her put food on the table to feed her family. One day soon after, that woman donated other items to the pantry. “Because of that kindness that was shown to her, she is now compelled to give out of nothing, and I mean nothing. We’re touching people’s lives,” Renee says.

Although they started Blessing Boxes due to the pandemic, they still plan to continue putting up boxes around Columbia long after the pandemic ends. In terms of plans for expansion into other cities, Wayland says that many counties in the surrounding area have the same need for food pantries. “If you want to take the blueprint, we do not want any credit for it, take it and run with it. That is our hope is to be a pilot for other people but stay here, where we can keep this up.” Wayland says. Their focus will continue to be their community and their neighbors right here in Columbia.