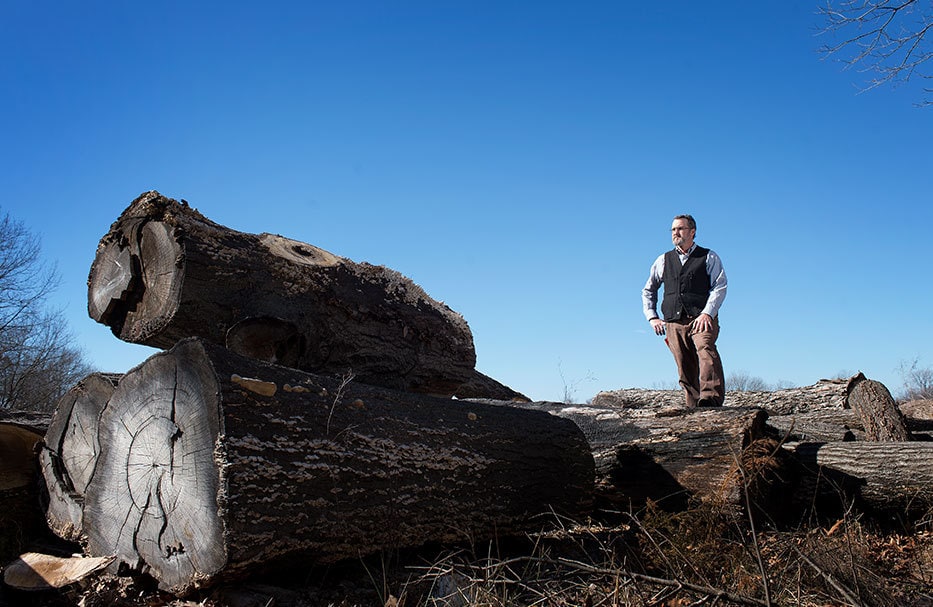 Do you live to work or work to live? I asked Drew Lemberger of Rocheport what motivates him to own and operate a handful of small businesses while shouldering the challenges of growing one of the state’s largest wineries, Les Bourgeois Vineyards in Rocheport.

“It’s not what you do, but how you do it that defines your life,” he says. “I’ve found a rewarding way to live, not to just do something, but to be something, and all of these things come together — well, 90 percent of the time,” he says.

“My core job is still Les Bourgeois and all of the other things intertwine nicely. In the summertime, fall and spring, I pick mushrooms and give boat tours. In the winter, I fix things and build boats. The whole goal is to make all the parts work together,” he says.

Drew’s friend Susan Schapira, owner of Abigail’s restaurant in Rocheport, quickly added, “Drew is a great person. Eclectic. He is living the small-town American Dream.” A small part of that dream is a wooden tandem kayak that hung from the rafters of Abigail’s for several years.

River Adventurer
Drew built that two-person kayak by hand to compete in the second annual MR340, billed as the world’s longest nonstop river race, traversing 340 miles across Missouri. The race is listed as one of the 100 best American adventure trips, according to National Geographic.

He paddled the race with Les Bourgeois CEO Curtis Bourgeois, because “Curtis and I wanted to bring attention to recreational traffic for the river.” Drew noted that “the hardest part was getting the boat built in time. We only had about a week and a half to practice before the race.” Nevertheless, they finished with a respectable time.

But once was not enough for Drew. “I always wanted to do the river solo as a bucket list item sometime in my life,” Drew said. So, the next year, Drew built another wooden kayak and finished solo in 77 hours. Drew would like to do the race solo again, so “I can appreciate the race more for what it is. The camaraderie of the paddlers and it is a beautiful river.”

Boat Builder
Kayaks for the MR340 were not the first boats built by Drew. In 2000, he founded Missouri Boat Works. Drew got into boat building because he wanted something specific and couldn’t find it, so he bought plans and built it.

“The first boat I built was the offshore dory boat I use for the guide service. It is constructed of yellow pine and marine grade plywood. I used locally sourced wood for the trim — walnut and ash.”

Drew has also built rowing prams, and done “quite as bit of restoration work on rowing boats and wooden canoes.” Drew is a third generation boat builder. His great uncle Joe used to build jon boats out of white oak. “My dad … was always fixing boats.”

River Guide
A self-proclaimed river rat, Drew is always looking for an opportunity to introduce people to the recreational opportunities available on the Missouri River. After building his 17-foot offshore dory in 2000, Drew’s Guide Service began.

Drew’s most popular trips are for summer sunsets, but Drew is a knowledgeable angler, and his guide service is in high demand, too. “If you want to go out for two days, I can do that. If you want to fish or kick around on a sandbar, I can do that. We can go out at night and look for bats.”

“I took out Gruff Rhys (the Welsh musician), doing the movie ‘American Interior,’” Drew says. The documentary is a fantastical musical of both Rys’s 18th century explorer ancestor John Evans and his own encounters on the Missouri River. Video and stories of Drew’s Guide Service experience appear in the film “American Interior,” as well as the accompanying book.

VP of Retail Operations at Les Bourgeois Winery
Drew took a nontraditional path before taking his leadership role at Les Bourgeois Vineyards. A few hours short of finishing a bachelor’s degree in the School of Natural Resources at the University of Missouri, Drew enlisted in the Army Reserve in 1991 at the end of the first gulf war, and then started working part-time at Les Bourgeois.

“I was the cellar master for quite a while. Then as we got bigger, I transitioned to running all of the packaging and warehousing,” he says.

As the Les Bourgeois business grew, a need for a more consistent experience at all of the properties emerged. “Each place has a different vibe. I guess we wanted more brand cohesion and better oversight. Now my main scope is the day-to-day operations of the selling of food and wine.”

“Wine consumption is up, and consumer demand is more sophisticated. As we got bigger, we had more options to develop and offer more wines,” he says, including limited edition offerings and the popular collector’s series. Fleur du Vin is an example of a Les Bourgeois wine driven by customer demand.

“You have to produce new wines right, market it right, package it right. We’ve offered the Fleur Du Vin for six years now and people love it. Now there is a strong demand. It’s a great wine. One of my favorites,” Drew says.

People are celebrating the local movement, which is changing the landscape of the wine industry — small batch, hand-crafted and local is in growing demand.
“Not just wine, but food. Which is good for us, because we have been doing it all along,” Drew pointed out.

Organic Farmer
When he’s not building boats or working at the winery, Drew can often be found on his 20-acre farm nearby, called Sinking Creek Organics. The woods are dotted with sinkholes, which provide a cool, humid microclimate for growing mushrooms. Drew is now organically growing Shitake mushrooms on about 1,000 sugar maple, red and white oak logs carefully arranged around the sinkholes.

“The Shitake mushrooms are slow growing, so I know what I will have three or four days in advance. I figure out what our chef wants at the Les Bourgeois Bistro, and sell the others if there are any,” Drew says.

In Columbia, Sycamore, Broadway Brewery, and Wine Cellar Bistro occasionally feature Sinking Creek mushrooms, but Abigail’s in Rocheport has first option, and they buy all of Drew’s mushrooms they can get.

“When he brings them in here, you should see them! They are big, fresh and plump… plus, so very local,” Susan exclaimed. Susan uses the Shitake mushrooms for a cream sauce, on bruschetta, in pasta dishes, and with broccoli. Her mushroom dishes are among her customers’ favorites.

Although Drew grew up in south St. Louis, his family “always camped and did a lot of floating, taking frequent trips to the Current and Jacks Fork rivers.” Those experiences of fishing and swimming in Missouri’s scenic rivers, and running through our canopied hills as a boy helped Drew envision the lifestyle he wanted to live. A lifestyle focused on how you do things, and how those things are part of something bigger. A lifestyle connected to nature — fishing, providing river tours, catering to tastes for local food and local wine… the small-town American dream.

50 People, Places, and Things that are So Columbia