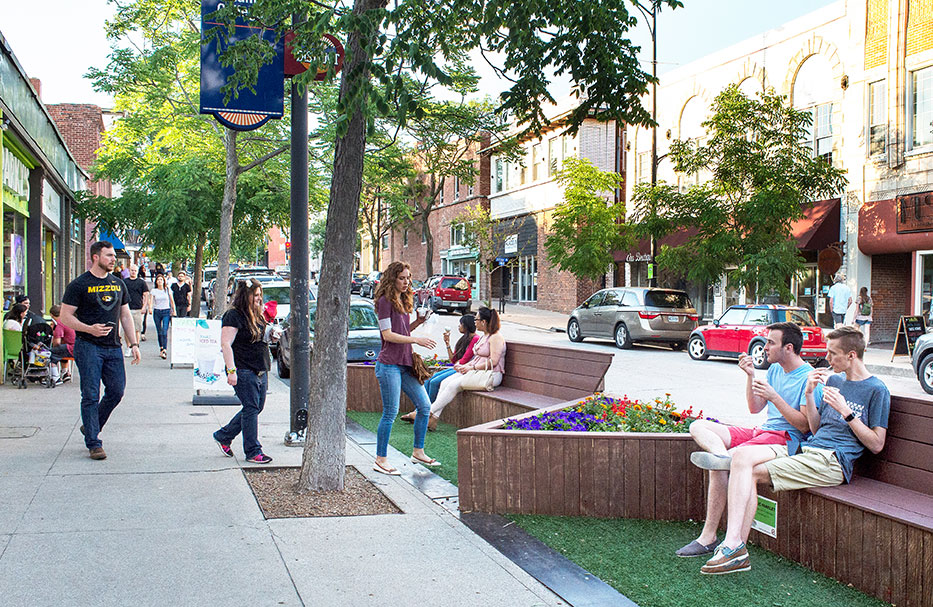 There’s never a lack of momentum in Columbia’s downtown business district, day or night. Confectioneries open their doors as the sun rises, bars and nightclubs wake up well after dark.

“It’s a constant change of scenery,” says Executive Director Katie Essing. “You can come down and discover different things with every visit. I love how it changes… it really has this 24/7 vibe. It feels different in the daytime, when there might be a little more city business going on, than at night when it transitions more into entertainment, there’s always something going on. You get a feel for that when you walk on Ninth Street and there’s music on the corner and people gathering. And we really work to help foster a downtown that meets everyone’s needs, from college students to families with young children. There’s something for everyone, whether you want to dine, shop or tickle the ivory keys on the traveling street piano, The District has just what you crave.”

Nightlife
It’s a common misconception that The District’s nightlife scene is mostly college-oriented. True, there are plenty of places to grab a PBR or a dollar well drink, but if you’re looking for something with a different vibe — maybe a dive bar or speakeasy is more your style, or maybe you want something with a touch of class — you are in luck, my friend.

Shopping
Boutiques abound. That’s what you’ll find in Columbia’s downtown. From clothing to crafts, there’s not much you can’t find in one of The District’s many local shops. It’s a hot spot for brides and prom-goers who are in search of the perfect dress, those on the hunt for the latest kitchen gadget or maybe a new backpack for an outdoor adventure.

Fare
Hungry? You won’t be for long. Pop into one of the many restaurants, bakeries and bars downtown to get a quick bite, or dress up and settle in for an evening of superbly fine fare. Take your pick of an outdoor or indoor setting, too, as there are plenty of patio dining options in the area.

Parklet
A sure sign of summer is the sight of The District’s “parklet,” a patch of green in a sea of asphalt, two-parking-spaces large, that finds its home on streets downtown during Missouri’s warmest months. Take a break from strolling and grab a cold brew from Kaldi’s or a scoop of fresh ice cream from Sparky’s while you soak up the summer sun.

Street piano
You’re more likely to hear a twinkling tune floating through the downtown airspace after the addition of the traveling piano, gifted by the Columbia Piano Technicians Guild in 2015. The piano, originally stationed outside Teller’s on Ninth Street, has taken up a touring career, moving periodically around downtown. A second piano joined the ranks and a third makes its home on MU’s campus.

Entertainment
Live music, art galleries, street performers and performance arts… at any given time, you’re likely to find one or more of these forms of entertainment downtown. If you can’t, keep walking. There’s bound to be something around the next corner.

Oh, The Many Things We Love About Columbia