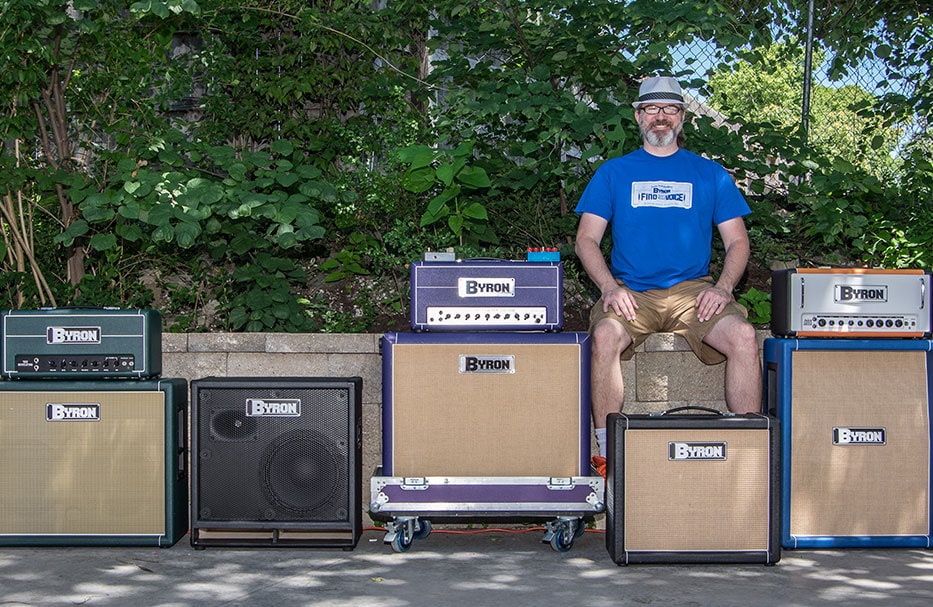 Mike Dulak has been building mandolins for 22 years. Having spent decades playing in honky-tonks and clubs, he is a seasoned and grizzled musician with the chops to hang with any band you could put him with. Folks in Columbia might recognize some of his hilariously named (but blazingly talented) groups such as The Rank Sinatras and The Boone County Tickpickers. Anyone that has seen Dulak on stage knows that he is just as much a comedian and performance artist as he is a musician. Sometimes he refers to himself as Mike Raphone while bantering with the audience (Get it? Microphone?).

“There was a period where I was playing four nights a week, for 7 straight years, year-round at the same club,” says Dulak. “That’s how I got relatively good at playing the guitar and country singing. When you play that much, you either get good or they throw you out.”

The shop for his company, Big Muddy Mandolin Company, is nestled in the river village of Rocheport. There, with his trusty Basset Hound Oliver at his side, he meticulously hand crafts each mandolin. Using exotic woods such as koa and purple heart, he creates a mandolin that not only looks gorgeous but sounds great. Handmade mandolins of this caliber could easily cost an arm and a leg, but Big Muddy Mandolins are very reasonably priced for the quality of the product.

Dulak enjoys the quiet life of living in Rocheport. When he isn’t building mandos, he is hitting the trail with Oliver or playing in senior league baseball tournaments. Don’t let that laidback lifestyle fool you. When it comes to precision of his craft, Dulak never skimps on quality. When the rare occasion arises that a client needs a repair, he goes out of his way to help them out. In one instance, a broke college student needed a major repair.

“I told him that it would cost him two pounds of dark roasted coffee from his local roastery,” says Dulak. “I could hear the guy’s jaw hit the floor when I told him that over the phone, because it was a pretty major repair. When I got the package, I actually ended up with five pounds of coffee.”

His craftsmanship has gotten him noticed by national acts. Atlantic Records Country Recording artist Hunter Hayes plays a Big Muddy Mandolin. Hayes even went so far as to send Dulak a signed endorsement stating: “Thank you Big Muddy Mandolin for making an unbelievable little instrument that I can’t put down!”

Byron Neighbors has also cut his teeth with years of playing music in clubs across Missouri. You may recognize him from acts such as Blue Eyed Dog, The Mercury Trio or the wildly popular Pink Floyd tribute Interstellar Overdrive. Rather than craft instruments, he was more interested in creating an amp with a versatility in tone to satisfy everyone from country artists to metalheads.

“Amps specifically are a fascinating musical instrument, especially tube amps,” says Byron. “The good ones feel alive, like a part of you, and I try very hard to make amps that seem to be an extension of your guitar.”

It all started for Byron when, in 2003, he was unhappy with a vintage Marshall reissue he had purchased. “I really wasn’t happy with the tone. So I ended up gutting it, only keeping the pots, jacks, pots, jacks, transformers and switches, and totally rebuilding it to 1965 specs. So in a way that was the first amp I ever built.”

Since then, he has been honing his craft. Eventually, Byron Amps was born. He taught himself the science behind audio, how to read schematics, and eventually, how to design and build his own pedals, amps, speakers and pickups. In May of 2016, he took the leap and left his retail job of 20 years to build his amps full-time.

“I had yearned to go full-time with the business for a very long time, but it never seemed to be the right time. Eventually I decided that it would never be the perfect time, and I just needed to get on with it,” he said.

Aside from having tone for miles, these amps have a stunning exterior design that really pops when you see them from the dance floor. If you have been out to a show recently, there is a good chance that you would see a Byron amplifier gracing the stage alongside the band. Byron Amps are now played by a plethora of mid-Missouri guitarists from such acts as Don’t Mind Dying, Violent and the Undercurrents, and the Cherry Pistols.

Another prolific act that proudly plays Byron Amps is none other than The Many Colored Death (MCD), which brings us to MCD lead singer and guitarist Brent Moore. While Moore rocks by night, by day he builds custom electric guitars. His brand, Brynmawr Guitars is unique in its cross-pollination of style; mashing together motifs from different, classic brands. Want a flying-V body with a Fender Stratocaster headstock? You got it. How about a 12-string neck on a Telcaster body? Sure, why not?

The rock frontman has been assembling guitars almost as long as he has played. Since age 16, he has been making “oddball custom-parts guitars with mods.”

“The ideas for the builds almost always start with me looking around and thinking about what it is that I don’t see hanging on store shelves,” says Moore. “Sometimes I end up buying something cheap and deciding to turn it into something else. Sometimes I start from scratch and sort of come up with a list of what I’d like the guitar to be. Then I start hunting the parts to make it happen.”

Moore has an intrinsic understanding of not only what makes a great guitar, but also what makes a great guitarist. His passion for the six strings has led him on a conquest for meaty tones and dexterous technique. Couple that with his soaring vocal range and you have one of the most exciting frontmen in the mid-Missouri music scene, as well as one of the best axemen around. Playing his soaring solos on a guitar he built, provides Moore with an extra sense of pride.

“I love playing the guitars I’ve built and especially love it when people come up after shows and want to talk about them with me,” says Moore. “Since I came up with the idea and was there every step of the way bringing it to life, there is definitely a special sense of pride there. I also am keenly aware when something needs to be adjusted or something isn’t quite right with my creations.”

When speaking with Moore, Dulak and Neighbors it becomes obvious that these craftsmen are bound, not only by a common love of instrumentation and musical talent, but also by a jovial air of pride in their work. These three are music-makers in more than one sense and their passion can be heard echoing throughout the corridors of music venues across the state.