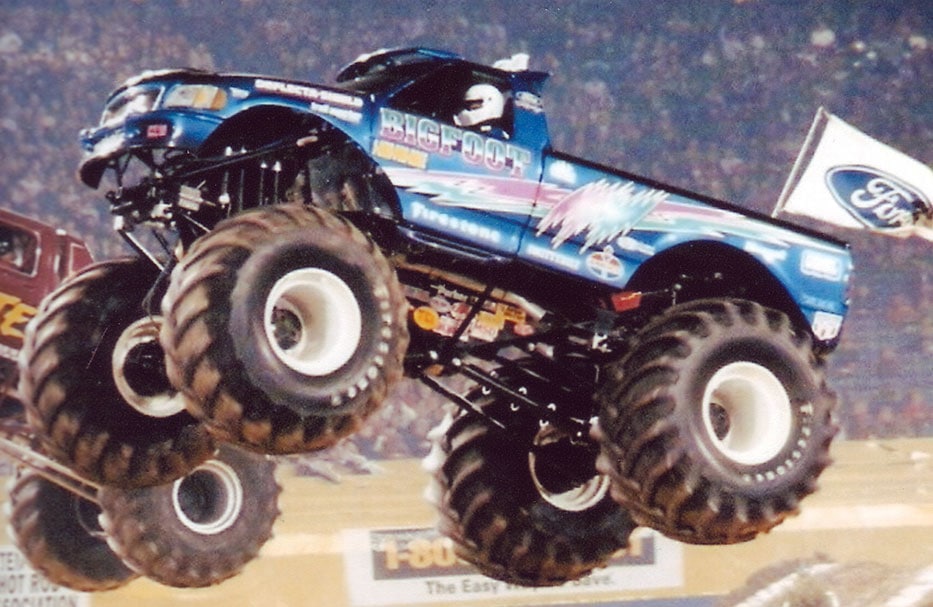 Gene Patterson of Jefferson City knows what it’s like to roll with the big ones. When he gets behind the wheel of a 12,000-pound, 10-foot tall, 1,000-horsepower truck, “It’s all about freedom,” he said.

Bigfoot trucks sit on tires that are more than five feet tall. They have independent steering systems for front and back wheels. “The first Bigfoots were just regular modified trucks,” Gene said. “Now they are built on custom bodies with all the technological advances and safety features.”

Bigfoot trucks were invented by Bob Chandler of Ferguson, Missouri, in 1975. Gene knew Chandler through a mutual friend, Jon Breen, who was building monster trucks of his own. Gene and his friends started driving big four-wheel-drive trucks in and through rivers near Lesterville and Eminence, and Gene grew interested in the ability to drive anywhere a rig would take him.

He landed a job driving Bigfoot trucks in 1987. By 1991, he was named a “mover and shaker” in the four-wheel-drive industry, in large part due to his creation of a fictional character for the Mattel toy company. Mattel wanted a “bad guy image” to help sell more toys, so Gene invented Colt Cobra of Cobra Creek, Colorado, with a big rig named “Snakebite.” Gene became a masked menace before climbing behind the wheel of Snakebite and pretty soon, lots of Bigfoot trucks began taking on personas of their own. 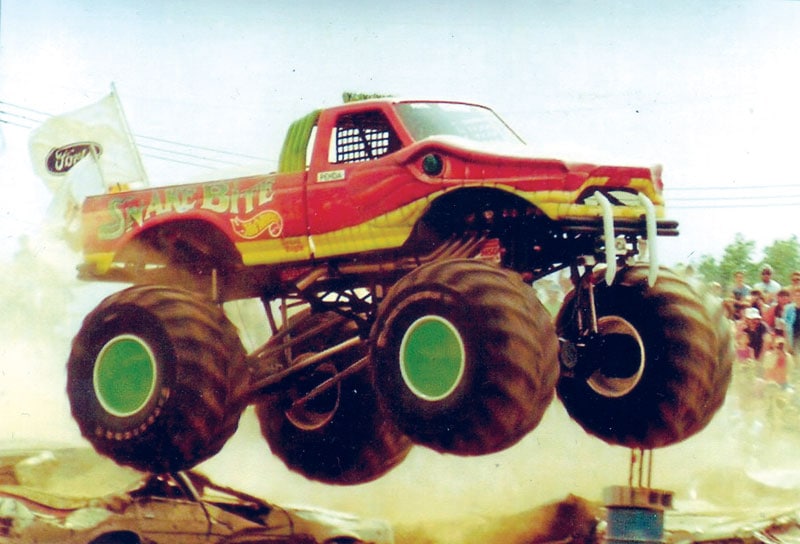 Gene drove a variety of trucks for Bigfoot from 1987 to 1994 and 1997 to 2000. He and his wife, Susan, traveled all over the country, and Gene appeared in three movies: “Roadhouse”, “Police Academy 6” and “Tango & Cash”. He worked on the crew, performed stunts and acted as an extra in the film “Roadhouse”. It made a long-lasting impression on them. “We had access to the Warner Bros. lot, and we got to know some of the actors real well. It was just kind of a homey feel,” Gene said. “Plus, we got to see parts of this beautiful country we never would have seen before.”

Driving a monster truck is intimidating at first, Gene said, but pretty soon it’s like second nature. It requires dexterity, especially in tight spaces. But flying over obstacles and driving on top of cars as their windows break and the body collapses under your wheels? That’s all in a day’s work. The best part, says Gene, is pleasing the fans.

“It’s a fantastic feeling,” he said. “They’re in a happy place. They can forget their problems and all the turmoil in the world just by seeing the unexpected sight of cars being crushed. I think it’s related to road rage, you know, the feeling you get when you’re stuck in traffic and you just wish you could drive right on top of the cars in front of you?” Fans sometimes grabbed pieces of the crushed cars for him to autograph.

In 2015, Gene was selected by fellow drivers to be inducted into the International Monster Truck Hall of Fame in Auburn, Indiana. It was a rewarding culmination to a career he loved. Now he is a sheet metal worker in Local 36, working for Industrial Enterprises. But he’s found another way to apply what he learned as a BigFoot driver: he travels throughout the county making D.A.R.E. presentations to fifth through eighth graders.

“I tell them, ‘Never give up on your dreams.’ I grew up in Tuscumbia, Missouri, population 256, but I was able to follow my dreams and have a fantastic career.”