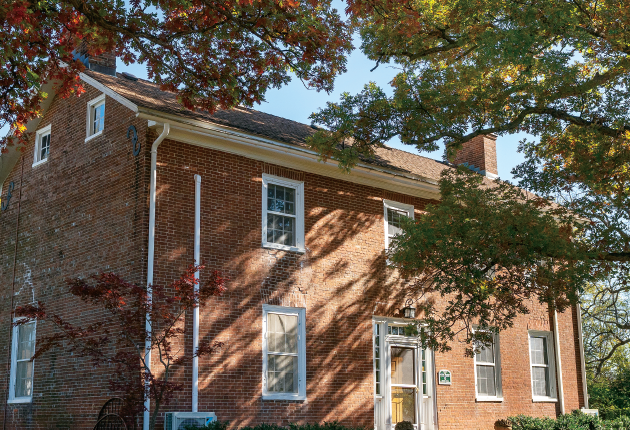 As a former art history professor, and now adjunct at the University, Julie Plax has a great appreciation for the ancient and the antiquated. It was this love that led her after many years to purchase one of Columbia’s oldest homes — and discover the personal connections the home seems to weave together throughout time. Plax purchased the historic Greenwood home, built sometime in the 1830s by Walter Raleigh Lenoir, two years ago, but her fascination with it actually began in the 1970s during a visit to an antique shop. Melissa Williams and her father owned the property, and Williams ran an antique shop called “Greenwood Heights” at the
property. “I went to the antique store and was friendly with Melissa
and loved the house,” Plax says. “I remember thinking I’d like to live
there someday.”

Fast forward almost 40 years and Plax, now a retiree, was living in Arizona casually perusing real estate listings in her spare time when she stumbled across a listing for the Greenwood home. “I like to look at real estate from places I have lived in, so I looked at Columbia and there it was.” Plax says. She checked the listing religiously until one day, it had suddenly gone off the market. Determined to find out what happened to this home that seemed to strangely speak to her somehow, she contacted the realtor and eventually purchased the home a year later, making sure to connect once again with her friend Melissa Williams, who now owns an antique and painting gallery downtown, when she moved back to Columbia.

While doing minor repairs to the home, Plax began discovering the home’s ability to connect people. She decided to repair the greenhouse on the property, which had succumbed to weather and wood rot, and began asking around for a handyman. A friend offered someone he knew, Greg Hooker, and Plax soon discovered that Hooker had actually been one of the original builders of the greenhouse, and had done repair work on the home many years ago.

“There are a lot of coincidences like that surrounding the house,” Plax says. Perhaps the most odd event happened on a Sunday afternoon about a year ago. “A woman I didn’t know knocked on the door and said, ‘My husband and I are on a genealogical vacation and my grandfather was born in this house.’ She wanted to take some pictures, so I showed her around and she showed me some pictures of the home back when her ancestors, the Kurtzes, lived here.”

One day, antique aficionado Williams came to visit, and Plax mentioned the couple who had stopped in to see her. Williams showed her an etching in a window in the parlor that says ‘DWB Kurtz Jr.’ with the date ‘1-2-11.’” It seems that previous owners of the Greenwood home knew that it would stand for centuries, and that perhaps one day their grandchildren might discover a small piece of their history.

But Plax doesn’t just love her Greenwood home for its ability to relay history. She loves the hand-carved fireplace mantles, the antiques her parents had collected that now furnish the home, her ability to teach part-time at the University from her home and the fact that after four decades, she was able to fulfill her wish of “living there someday.”